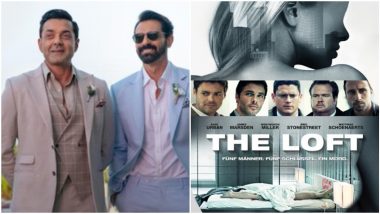 On March 3, Netflix India announced its slate of films and series through two video promos. Among its many interesting upcoming properties, one movie that caught our attention is Penthouse. Considering it is directed by Abbas-Mustan, masters in making pulpy thrillers, Penthouse surely makes for a curious attraction. With a star cast involving the likes of Bobby Deol, Arjun Rampal, Sharman Joshi, Mouni Roy, Cyrus Broacha, Tisca Chopra, and Abrar Zahoor, the intrigue has increased ten-fold. And then we saw some of the stills. Netflix Slate 2021: Dhamaka, Penthouse, Navarasa, Fabulous Lives of Bollywood Wives S2 – Complete List of Films, Series and Reality Shows Arriving on the Streaming Giant!

Apart from being the directors of some memorable pulp thrillers in Bollywood, Abbas-Mustan are also, unfortunately, known for their lack of originality. Even their more recognised work like Baazigar, Ajnabee, Badshah, Humraaz etc have been remakes of Hollywood thrillers. Looks like Penthouse also falls in the same category.

A murder mystery, it is about five friends who share a secret apartment, or the loft, which they use to carry on with their individual clandestine affairs outside their marriages. Things turn for the worse, when one day, they find a body of a girl in the apartment, leading to them pointing fingers at each other.

While the stills of Penthouse gave this deja vu feeling about The Loft, further validation was received from the synopsis note shared  by Netflix for the film - "When architect Vikram Saxena proposes sharing a Penthouse with his five married friends, it seems like the perfect solution for their indulgences, until one morning, a body of an unknown woman is found in the Penthouse. Friendships tested, loyalties questioned and marriages crumble as the shocking truth unravels in this relentless whodunit."

While Bollywood and remakes have always gone hand-in-hand - see the recent remake of The Girl on the Train - let's hope that remake rights have been bought officially for Penthouse. And also that Abbas-Mustan would have added something novel from their white sleeves.

(The above story first appeared on LatestLY on Mar 03, 2021 04:49 PM IST. For more news and updates on politics, world, sports, entertainment and lifestyle, log on to our website latestly.com).