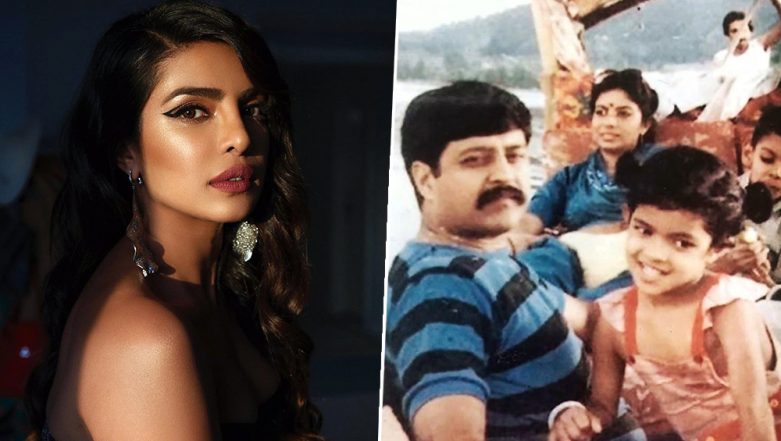 With this Sunday being Father's Day, we can imagine how difficult it must have been for actress Priyanka Chopra who must have missed her father, the late Dr Ashok Chopra. The actress who even has a tattoo written as 'Daddy's Lil Girl" and we are sure she must have dearly missed him on this special day celebrating fathers and the special bond they share with their kids. Priyanka took to Twitter to share a picture along with her father from her childhood days and had sweet message written for him. Priyanka Chopra Steps Out With Nick Jonas in NYC Looking Gorgeous in a Mini Dress But Her Kneecap Suggests She's Still Not Recovered - See Pics.

Sharing a picture from her childhood where Priyanka is seen along with her father and mother Madhu Chopra in the background, she wrote, "Father’s Day on moms birthday.. it’s almost like dad is here celebrating with us. Don’t need a day to miss and appreciate you dad. I love you. #HappyFathersDay #daddyslilgirl for life."

Father’s Day on moms birthday.. it’s almost like dad is here celebrating with us. Don’t need a day to miss and appreciate you dad. I love you. #HappyFathersDay #daddyslilgirl for life

We loved how the actress in her caption called herself 'daddys lil girlfor life'. It is indeed a special day for her considering it is also her mother Madhu Chopra's birthday.

Priyanka was recently in Mumbai to wrap up the shooting of her upcoming film, The Sky Is Pink which also stars Farhan Akhtar and Zaira Wasim in lead roles. After wrapping up the film, Priyanka returned to New York to attend her husband Nick Jonas' concert with the Jonas Brothers.