Rakhi Sawant won many hearts by being her unfiltered self on Bigg Boss 14. The Pardesiya babe's honest and entertainment serving attitude made her a fan favourite. Now, when Rakhi was quizzed on who can play her role in her biopic, Alia Bhatt was the first choice. 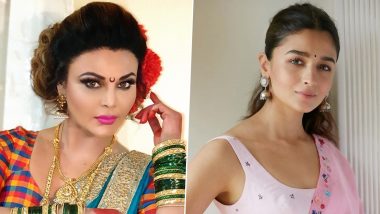 Rakhi Sawant won many hearts by being her unfiltered self on Bigg Boss 14. The Pardesiya babe's honest and entertainment serving attitude made her a fan favourite and that is how she was among the top five contestants on the latest season. Post the show, she shocked one and all when she claimed that Javed Akhtar wanted to make a biopic on her. Later, the lyricist confirmed that he indeed desired the same. Now, while talking to ETimes TV, Rakhi revealed who she thinks can best play her role in the biopic. Bigg Boss 14's Rakhi Sawant To Appear In Nach Baliye 10 With Her Husband Ritesh?

On meeting Javed Akhtar, she said, "It was a few years ago, we were travelling together and met on a flight. Javed Akhtar sir had told me that he wants to write a biopic on my life, how you struggled and became Rakhi Sawant. But then he got busy with his other projects and we did not meet after that. Now, I hope he gets time and if he has some time in hand hopefully, he will write the story."

When quizzed who she thinks is a perfect fit to play Rakhi on screen, she added, "I think there are two-three actresses who can do justice to my role. The first is Alia Bhatt, I think she is superb. She is bold and bindass and she is not scared of anyone. I think to play my role someone should have these characteristics. I think Priyanka Chopra Jonas can also play my role. Radhika Apte is also good. Both Priyanka and Radhika Apte are bold and have the spark to do my role." Rakhi Sawant Begins Shoot of Her Upcoming Web-Series Series ‘Tawaif Bazaar-E-Husn’ (Watch Video).

In the same interview, Rakhi also mentioned that she has gone through a lot of ups and downs in her life. Bigg Boss 14's contestant also added that she has crossed many lakshman rekha and handled everything with grace. Workwise, she has started shooting for her upcoming web-series Tawaif Bazaar-E-Husn. Stay tuned!

(The above story first appeared on LatestLY on Mar 16, 2021 07:35 PM IST. For more news and updates on politics, world, sports, entertainment and lifestyle, log on to our website latestly.com).