Ranbir Kapoor’s Pic Shooting On A Set Dressed In A Police Uniform Goes Viral, Fans Curious To Know About This New Project 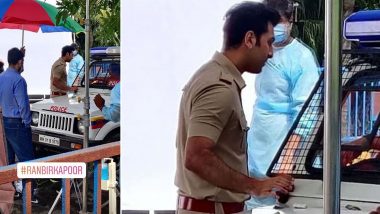 Ranbir Kapoor has fans across the globe and who wouldn’t want to catch a glimpse of this Kapoor lad? Fans eagerly wait to catch a glimpse of him and this time when his picture hit the internet, netizens were left stunned. The latest pic that has taken the internet by storm features RK looking dashing as ever but this time he had donned a police uniform. The picture of Ranbir was shared by his fan clubs from the set of some shoot. Ever since this pic of the handsome hunk has been shared online, fans are curious to know about this new project. Brahmastra: A Song From Ranbir Kapoor And Alia Bhatt Starrer Still Left To Be Shot (Read Details).

Fans are eagerly waiting to know if it is related to any of his upcoming films or is it for some commercial or a photoshoot, and some were even wondering if it is a recent pic or not. Some of the comments posted reads, ‘An ad?’, ‘Finally rk in police uniform!!Still remember his wish from umang 2019 to play a policeman!!’, ‘Brahmastra??’, ‘Police uniform, oh my God’, ‘Shamshera?’, ‘Aaaaww!! Inspector Ranbir’, ‘Rohit shetty new film promo’, ‘For an advertisement’, ‘Police in which movie?’, and so on. If you haven’t his pictures yet, check them out right away! 'Stylish' Ranbir Kapoor Is Back On The Sets Post COVID-19 Break! (View Pics).

RK Dressed In A Police Uniform

Something New Coming Up

On the work front, Ranbir Kapoor will next be seen in Brahmastra in which he’s sharing screen space for the first time with his ladylove Alia Bhatt. He’d also be seen in Karan Malhotra’s film Shamshera.

(The above story first appeared on LatestLY on Sep 13, 2020 11:56 AM IST. For more news and updates on politics, world, sports, entertainment and lifestyle, log on to our website latestly.com).