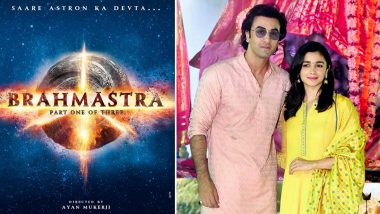 The upcoming action fantasy drama starring Ranbir Kapoor, Alia Bhatt and Amitabh Bachchan is one of the most-anticipated movies. The film has seen numerous delays. First it was due to technical reasons, the team required more time to get the VFX right and later the coronavirus outbreak impacted the shooting and other production works. According to latest reports, the makers are yet to shoot a song and apart from that a few more days of shoot is pending. Brahmastra: Here’s What Ayan Mukerji Did to Avoid Footages of Ranbir Kapoor – Alia Bhatt Starrer from Being Leaked.

Talking about the editing and dubbing work that the team has started to work upon, a source revealed to Mid-Day, “They have also been working on a special video series to introduce the audience to the world of Brahmastra, which will be unveiled in succession closer to the date of release which has yet to be decided given the delay and the fact that theatres in India are not yet operational. Editing is on and so also dubbing.” About the shoot pending to be filmed, the source shared that 10-12 days of brief shoot is remaining and that also includes the one song featuring Ranbir Kapoor and Alia Bhatt. Brahmastra: The Shooting of Ranbir Kapoor's Next Might Start in October, Actor to Work in Dual Shift.

The source stated, “They will decide on the timeline and shoot in a city studio.” “Amitabh Bachchan is expected to be a part of this final schedule and will shoot some important scenes with Ranbir Kapoor,” the source further stated. Ranbir Kapoor and Alia Bhatt would be seen playing the characters Shiva and Isha, respectively. Brahmastra is expected to release in December this year and it would be released in five languages - Hindi, Tamil, Telugu, Kannada and Malayalam.

(The above story first appeared on LatestLY on Sep 11, 2020 08:55 AM IST. For more news and updates on politics, world, sports, entertainment and lifestyle, log on to our website latestly.com).