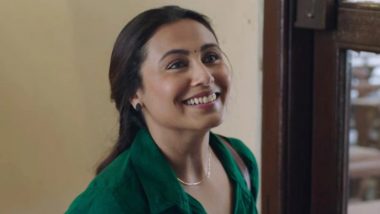 Actress Rani Mukerji is grateful to her fans for not writing her off after she got married and had a baby, helping her evade the general perception that careers of married actresses slow down. "Without my fans, I would not have been able to survive, especially with the kind of prejudices a married actress with a baby has to go through. The fact that they have supported me throughout is nothing short of a miracle and that's why I'm still working and doing relevant work," she claims. Hichki Completes 3 Years: Rani Mukerji Remembers Using Late Father’s Walking Stick in the YRF Film.

The actress completes 25 years in the film industry this year. "When I think of the number of years, it seems like a very long time but honestly for me it just seems like my journey has never stopped. It's just gone on and on since the day I was 16 and I started working. Now, 25 years feels the same because the struggle is yet on, and the learning is still on as an actor. There is a lot that I have to accomplish, there is a lot that I have to learn," she says. Rani Mukerji’s Mrs. Chatterjee Vs Norway: Here’s What We Know About The Film Based On A True Story.

She adds that she has discovered herself and her craft over the years. "For an actor, learning never stops and the more experience I have with different directors, different technicians, different co-stars, I get to learn a lot. It still feels nice and I am raring to go because with each film, I kind of discover a new me and I love telling stories -- important stories, powerful women stories," she says. The actress will next be seen in Bunty Aur Babli 2 and Mrs Chatterjee Vs Norway.

(The above story first appeared on LatestLY on Apr 01, 2021 12:56 PM IST. For more news and updates on politics, world, sports, entertainment and lifestyle, log on to our website latestly.com).