Richa Chadha Calls Out the Nepotism Debates, the Fake Condolers of Sushant Singh Rajput's Demise in a Hard-Hitting Blog Post 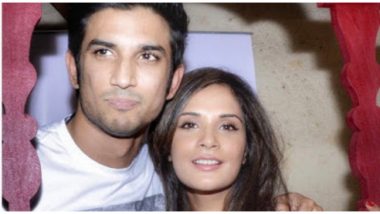 The world is still talking about Sushant Singh Rajput's death by suicide. The actor passed away on June 14 and the enquiry into his death is ongoing. Home Minister Amit Shah has taken note of Rhea Chakraborty's letter asking for a CBI probe into her boyfriend's death. Also, social media is scattered with filth - conspiracy theories, abuses towards people think are responsible and utter hypocrisy from the industry. Richa Chadha, who struggled with Sushant to land acting jobs, has written a scathing blog post calling out EVERYONE.

For starters, Richa criticised the way media has covered the death. "The reporting around Sushant’s demise has been so disastrous, there have been a spate of suicides in it’s aftermath. Who then decided to write a fictional account of his struggles with mental health (sic)?" She called out the media for circulating pictures of Sushant's dead body on media groups on WhatsApp.

Then she did not spare the so called fans who are on a crusade to harass everyone related to Sushant - from his girlfriend he wanted to marry to his friends, whom they accuse were not there. Who are these 'fans'? I checked out a few profiles online. The same gutter mouths that abused Sushant when he took a stand on the 'Padmavat' issue are now abusing his loved ones for 'not being there' for him. Several of these are fake fan profiles that have emerged overnight, they're using his images to get their daily fix of online validation," Richa rightly pointed out.

Then, of course, unlike ever before, Sushant's death has also triggered the debate about nepotism, which was sparked off by Kangana Ranaut on an glamourous episode of Koffee With Karan, years ago.

"A lot of actors citing nepotism as a reason for ‘not being accepted’ are the ones that got their breaks specifically BECAUSE of nepotism. i.e. they were physically and/or metaphorically in bed with the influential person that recommended them to a producer who gave them their first film or their family friend’s son was making a film and needed a ‘new face’ which was easily found in the family WhatsApp group," she said.

Richa revealed that filmmakers "have run down movies of their peers pre-release, have replaced actresses who refused to sleep with them at the last minute and several have in fact repeatedly forecasted ‘iska kuch nahi hoga’."

And, beautifully, she recalled her days with Sushant. "Sushant and I started out by workshopping together in a theatre group. I was sharing a 700 sq ft apartment in Andheri West with a friend from Delhi. Sushant would pick me up on his bike and we would head to the rehearsal, for which I was grateful. I wasn't poor or broke. But I can't say money was not a consideration when I had to head out to do an ad audition for a skin brand. I would worry about my make up melting in the auto rickshaw before I even arrived. This was would NEVER happen with a 'star-kid', and if it does, they will be lauded for being humble enough to take the rickshaw in the first place."

Richa's blog is a revelation. Everything wrong with the film industry wrapped in one post. It is a must-read.

(The above story first appeared on LatestLY on Jul 16, 2020 08:11 PM IST. For more news and updates on politics, world, sports, entertainment and lifestyle, log on to our website latestly.com).