Riteish Deshmukh Wishes Mithun Chakraborty on His Birthday With an Old Black and White Pic, Calls Him His 'Favourite Superstar' (View Post) 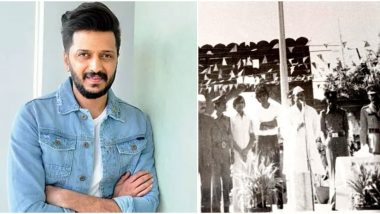 Mithun Chakraborty celebrates his birthday on June 16. The veteran Bollywood actor turned 68 today but the actor decided not to celebrate it this year given the recent demise of Bollywood actor Sushant Singh Rajput. In a statement given to IANS his son Namashi said, "Given the current scenario of the COVID-19 pandemic and the untimely demise of our dear colleague Sushant, this year me and my father have decided to have no celebration on birthday and we urge people to stay safe and stay indoors as much as they can." While there were no celebrations, the actor did receive a lot of wishes from his fans and colleagues. Mithun Chakraborty Won’t Celebrate His Birthday over the Tragic Death of Sushant Singh Rajput.

Actor Riteish Deshmukh took to Twitter to share an old picture of Mithun Chakraborty along with his late father Vilasrao Deshmukh. The black and white picture seemed to be from a special ceremony. Sharing the same, Riteish Deshmukh wrote, "Old pic of my father & MithunDa -both of them were dear friends- for me he will always be my favourite superstar. Happy Birthday Dada love you loads ... KOI SAQUE #MithunChakraborty." In the tweet, Riteish mentioned how the Bollywood actor was a dear friend to his dad.

Old pic of my father & MithunDa -both of them were dear friends- for me he will always be my favourite superstar. Happy Birthday Dada love you loads ... KOI SAQUE #MithunChakraborty pic.twitter.com/n907f39FDc

Twitterati shared warm messages for Mithun-da by sharing his pictures and their favourite moments from films. Mithun Chakraborty starred in several acclaimed films including the likes of Disco Dancer, Prem Pratigyaa, Mujrim among others. In the later stage of his career, he began to judge reality shows and has been audience favourite.

(The above story first appeared on LatestLY on Jun 16, 2020 05:18 PM IST. For more news and updates on politics, world, sports, entertainment and lifestyle, log on to our website latestly.com).