Exclusive! Sai Tamhankar Reveals Why She Disappeared From Bollywood After Her Debut With Hunterrr in 2015 - Watch Video

Sai Tamhankar reveals the real reason behind her disappearance from Bollywood. 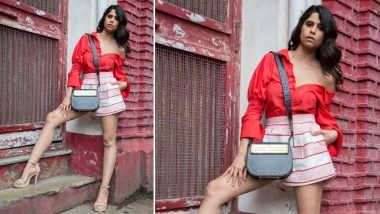 Popular Marathi actress, Sai Tamhankar is all set to shine bright in her second Bollywood release, Love Sonia, that hits the screens on Friday. One of the most loved and popular actresses in the Marathi film industry, Sai wasn't always keen to venture into Bollywood. However, Hunterrr's script was convincing enough to compel her to sign this Gulshan Devaiah starrer in 2015. While her performance was appreciated in this sex comedy, she disappeared from the scenario for three long years. Did she have any specific reason for her absence? Or was it to simply to allow her to work more in Marathi films? The actress revealed the reason exclusively to us. Love Sonia Movie Review: Mrunal Thakur is a Revelation Aided By Terrific Manoj Bajpayee, Richa Chadha in This Horrifying Tale of Survival Against Odds

When LatestLY got in touch with Sai Tamhankar to have an elaborate chat on her upcoming release, Love Sonia, the actress revealed that the dearth of scripts was the reason behind her absence. "Honestly I was getting similar offers (like Hunterrr) and I didn't want to restrict myself to such roles. So I waited until something as good as Love Sonia was offered to me and I am glad to be a part of it," she said when asked to elaborate on her reason. We agree for someone as talented as Sai, she shouldn't settle for anything less than what would challenge the actress in her. We are glad Love Sonia came her way and she was able to bag it. Love Sonia, Manmarziyaan, Mitron – Which Movie Will Claim Your Money This Weekend? Vote Now

Hear her revelation below

The actress also mentioned how she's relying on Love Sonia to her carve a way into the Bollywood. When you sign a movie that's so technically sound and decorated with some stellar performances, it helps you reach new heights. The movie that has won numerous awards at different international film festivals, will hit the Indian screens on coming Friday and we hope, that helps us see more of Sai Tamhankar in our entertainment industry.

(The above story first appeared on LatestLY on Sep 11, 2018 04:32 PM IST. For more news and updates on politics, world, sports, entertainment and lifestyle, log on to our website latestly.com).