December 27th is a huge day for many worldwide, well for no particular reason other than it being Bollywood's 'King of Blockbusters' Salman Khan's birthday. In fact, 2020 will see the actor turn 55, but would you believe us? He still looks 25. 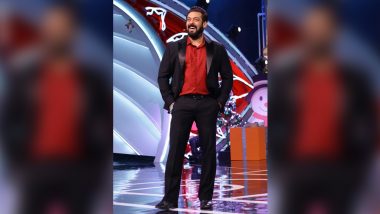 December 27th is  a huge day for many worldwide, well for no particular reason other than it being Bollywood's 'King of Blockbusters' Salman Khan's birthday. In fact, 2020 will see the actor turn 55, but would you believe us? He still looks 25. Such is his charm. Given the dreaded COVID-19 pandemic, Salman Khan, who usually celebrates his birthday with friends at his Panvel farmhouse with a huge bash, scaled down the celebrations this year, but made sure to spend some time with the media fraternity who rang in his birthday there. Salman Khan Birthday Special: Sultan, Bajrangi Bhaijaan, Tiger Zinda Hai -10 Biggest Hits Of The Bhai Of Bollywood In The Last Decade.

Given we are talking about Salman, as soon as the clock struck 12 am on December 27, his fans took to Twitter to wish the superstar of 30 years a very happy birthday. Fans all over the world not only wished Salman and poured lots of love on him, some of his ardent fan clubs also celebrated bhai's birthday in their own grand way. Bigg Boss 14 Weekend Ka Vaar December 26: Arshi Khan, Vikas Gupta, Rakhi Sawant and Others Present Salman Khan With a Groovy Birthday Surprise!.

Salute @BeingSalmanKhan For Saving Millions Under Privilged Children and Cancer Patients!! The Man with a Golden Heart!.. We Love You Salman ❤ HBD BIGGEST MEGASTAR EVER #HappyBirthdaySalmanKhan

From Nothing to the Biggest Megastar of Bollywood with all the Ups and Downs in his Career. Salman Khan has Come Along way to achieve this Position.

He is the only Bollywood star whose very presence in a movie is enough to start a buzz about it. And if he is starring as a lead in a film, one can be certain that that film is going to be a blockbuster.

Man With A Golden Heart... Indeed!

His heart is bigger than his biceps!

The Most Secure Top-Bollywood Actor Indeed!

Salman Has Earned His Spot With Industry Stalwarts:

Salman Khan is Only Star Working today who can join the All Time Great's like Amitabh Bachchan, Dilip Kumar etc. The Only True Blue Megastar!!#HappyBirthdaySalmanKhan

Most Attractive Personality In The Country... I Mean Look At Him:

◆Megastar Salman Khan was ranked 7th in Forbes’s first global list of the highest-paid actor in the world with USD 33.5 million

◆In September 2015, a leading magazine announced him” The Most Attractive Personality “ in India#HappyBirthdaySalmanKhan

One On Behalf Of MS Dhoni Fans:

Thank you @BeingSalmanKhan fr entertaining us Since decades.

On behalf of #MSDhoni Fans Wishing u a grt year n the best in life.#HappyBirthdaySalmanKhan pic.twitter.com/H6Xo91nEeO

"I've seen him (Salman) at concerts abroad. He whips up mass hysteria just standing on stage unbuttoning his shirt to the beat of Tap Tap Tapori. When he takes off his shirt there's a near-riot. It takes the crowd 5 mins to settle down again" - SRK#HappyBirthdaySalmanKhan pic.twitter.com/9aRpjXoDgM

Salman Khan Running Towards Box-Office To Deliver Blockbusters in 2021 Be Like:

Despite Of Illogical Negativities By Bhakts & Haters He's Ruling The Industry Like No Body Ever Did.

This Is What Loyal Fans Do!

" Salman Khan is the perfect example of a superstar with raw stardom, whose fan following will stay intact irrespective of the film’s quality "

are trending in India 🔥

A majority of tweets listed down all of Salman Khan's achievements in the entertainment industry and some of them also hailed the actor for his un-announced in the media humanitarian work. Well, such is Salman, not peetofying a dhol about how and when he gives it back to the people in his own way. Happy Birthday Salman Khan. It can be safely said that Bollywood wouldn't be what it is today without you.

(The above story first appeared on LatestLY on Dec 27, 2020 08:36 AM IST. For more news and updates on politics, world, sports, entertainment and lifestyle, log on to our website latestly.com).