Salman Khan's career in the last 10 years has been a classic example of neighbour's envy, owner's pride. He has given the industry some of the biggest hits it has ever seen. So on his birthday, let's talk about 10 of his shining box office jewels. 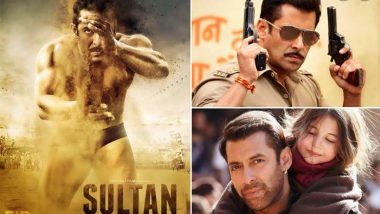 The last decade, from 2010-2020, can easily be christened as the Salman Khan Decade. It chronicles his journey from a sudden, meteoric rise to box office stardom 22 years after his debut to huge disappointments. We have a feeling even Salman didn't anticipate such a boom in his stardom in the last decade. His career got a new lease of life with Wanted in 2009 and since then, he didn't have to look back. Dabangg, Ek Tha Tiger, Sultan, Bajrangi Bhaijaan and by the time this decade ended, two of these mentioned have a franchise of their own. He is perhaps the only actor who supposedly has the distinction of churning flops that earn over Rs 100 crore. Tiger 3: Shooting Of Salman Khan And Katrina Kaif’s Next Film To Commence From March 2021?

Would you believe if we say he began the decade with one of his biggest duds? That's Veer by the way and then Dabangg happened which is still going on. So on Bhai ka birthday, let's talk about Salman Khan's biggest hits of the last decade, a report card many would love to call their own.

It all truly began with this film. The corrupt Robinhood Pandey spelled such magic on the audience that Salman is still reaping the benefits of it. The music was widely appreciated and the cheeky one-liners have a fanbase of their own. And yes the belt dance did help as well.

In case anybody thought Dabangg was a fluke, here comes Ready which made people believe that Salman Khan was going get to much bigger than he ever was as the most bankable star. It didn't matter that the film had some of the tackiest dialogues ever heard in a Salman movie. It was an official remake of a Telugu film by the same name.

It was as if South Indian remakes found a new muscle man in Salman especially after Wanted and Ready. Bodyguard was a remake of a Malayalam film by the same name. Salman Khan falling in love with a girl on phone looked quite cute.

A RAW agent in love is a perfect solution for a Bollywood blockbuster and add a bit of Salman-esque action, you have a megablockbuster. Till recently, it was the biggest Independence Day collection ever before Mission Mangal trumped it.

Robinhood Pandey was back again doing his thing and with amplified action and cocky lines. His fans in particular loved his corrupt guy act a lot once more.

After being almost there a few times, Salman Khan finally entered the Rs 200 crore club with a devious entry. His Dil mei aata hu, samajh mei nahi jibe rocked the nation and is now one of the oft used phrases. Devil was very fashionably and tastefully bad but with a golden heart. After all, it's Salman, even his being bad needs justification!

Here comes one of Salman Khan's biggest hits and the movie that made many critics take note of his acting skills as well. Don't get them wrong. Salman's acting prowess was more pronounced in the movies he did back in the 90s or early 2000s. An A-lister playing an AIDS patient in Phir Milenge was unheard of when he did it back in 2004. These days his movies are more indulgent towards his stardom and physical appearance. BB came as a breath of fresh air as it was getting a bit tiring to watch him in template roles. The slow-witted but pure at heart Indian tries to help a Pakistani kid was gold at the box office and earned him his first Rs 300 crore film.

Salman Khan got a Diwali release after many years with PRDP and the title track of this was rage. It saw the opening day numbers of Rs 40 crore which was a first and it was a merry time at the box office.

Yet another film which was unlike the regular Salman fare that we are doled out every year. His fans could see he had put in a lot of effort on his body to become a wrestler and then transform into an out-of-shape has-been. That earned him amazing numbers at the box office and became his second Rs 300 crore film.

This is by far his biggest hit ever. RAW agent Tiger returns with Zoya and this time he is fighting his own and then some. Wild and machismo-riddled action made people go crazy for this film which was a Christmas release.

(The above story first appeared on LatestLY on Dec 27, 2020 12:00 AM IST. For more news and updates on politics, world, sports, entertainment and lifestyle, log on to our website latestly.com).