Sana Khan couldn't control her tears at the press meet of Neeraj Pandey's Special Ops. She recently broke up with her boyfriend Melvin Louis. 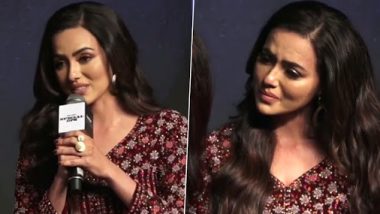 Sana Khan has been going through a rough phase personally. She broke up with her boyfriend Melvin Louis and announced it on Instagram. She cited infidelity as one of the reasons behind the breakup. Now it seems she felt a bit overwhelmed in front of the media and broke down. Sana is a part of Neeraj Panday's cast of Special Ops, a new show on Hotstar. A press meet was held recently and that's where Sana couldn't control herself. Sana Khan Opens Up on Her Ugly Breakup With Melvin Louis, Says ‘I’m Suffering From Depression and Anxiety’

Sana started by thanking Pandey for the opportunity and then she choked up. Gautami Kapoor was seen consoling her. It could also be because it is a big project and she is honoured to be part of it. That may have made her feel emotional.

Is there enough work for all the actors today with the extension of web platform? It's a tough question to answer as some have really benefited but still some are left and struggling. And yes there are personal relations problems, anxiety which are prime issues. Actress #sanakhan who recently broke off with her boyfriend #melvinlouis and she broke down at Neeraj Pandey's press meet. Some emotions you just cannot hide. #viralbhayani @viralbhayani

Special Ops is an assortment of all the terror attacks that India has braved so far. It also stars Kay Kay Menon, Divya Dutta, Vinay Pathak, Karan Tacker, Sajjad Delafrooze and many more.

(The above story first appeared on LatestLY on Feb 27, 2020 06:54 PM IST. For more news and updates on politics, world, sports, entertainment and lifestyle, log on to our website latestly.com).