Shahid Kapoor and Mira Rajput Are the 'Yin and Yang' Couple In This Gorgeous Monochrome Selfie! (View Pic)

The couple look fabulous and we're loving Shahid's new clean-shaven look in the same. The picture is receiving a lot of love from the couple's fans and friends too. 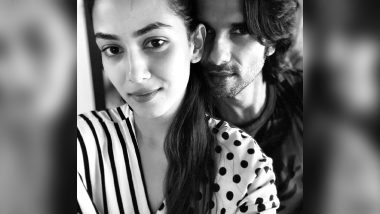 Shahid Kapoor recently took to social media to wish his wifey Mira Rajput on her birthday in an adorable post. The actor had written in the most beautiful manner, saying "I am blessed to have you in my life." If that post was any less cute, Mira has now taken to Instagram to share one of the cutest monochrome pictures of the duo. The couple look fabulous and we're loving Shahid's new clean-shaven look in the same. The picture is receiving a lot of love from the couple's fans and friends too. Shahid Kapoor Says 'Blessed to Have You In My Life' As He Wishes Wifey Mira Rajput On Her Birthday (View Post).

Sharing the gorgeous picture, Mira captioned it as, "Yin&Yang". Looks like Mira was hinting at how perfect their relationship is as they balance each other out and hence captioned it as 'Yin and Yang'. The picture received a lot of love from Shahid's fans who were all praises for the duo and how they are always giving couple goals. Referring to Shahid Kapoor's look, a fan also wrote, "Shahid is giving that kismat konnection vibe!"Shahid Kapoor And Mira's Son Zain Turns Two; The Couple Is 'Obsessing' Over Him With Cars And Trucks (View Pics).

On the work front, Shahid will be next seen in the Hindi remake of Jersey. The actor has been training in Cricket for the film and fans are more than excited for the film to release soon. The film stars Shahid along with Mrunal Thakur in lead roles. The movie is the Hindi remake of Telugu film of the same name which starred Nani in the leading role.

(The above story first appeared on LatestLY on Sep 10, 2020 06:44 PM IST. For more news and updates on politics, world, sports, entertainment and lifestyle, log on to our website latestly.com).