Shahid Kapoor And Mira's Son Zain Turns Two; The Couple Is 'Obsessing' Over Him With Cars And Trucks (View Pics)

Today is Zain's birthday and the little guys turned two. His parents Shahid Kapoor and Mira Rajput are obsessing over him with cars and trucks 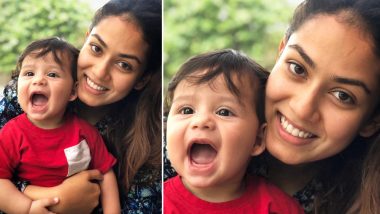 Zain, the adorable son of Shahid Kapoor and Mira Rajput, turns two today. Mira put up a lot of pictures about his birthday prep which seems like a lot of cars, trucks and Bob The Builder. Mira did some midnight prep wrapping up gifts which look really cute. All kinds of cars and trucks are stacked side by side while they are obsessing over little Zain's birthday. The latter was born on September 5, 2018. Last month, it was big sis Misha's birthday and Mira's special day is coming up too. So many celebrations all together must be keeping the spirits really high among the Kapoors. Shahid Kapoor Turns Into a ‘Fit’ Santa Claus for Kids Misha and Zain Kapoor, Wife Mira Rajput Shares the Christmas Special Picture With a Hilarious Caption

The Kapoors were in Mumbai when the lockdown due to the COVID-19 pandemic began. Later, we hear they moved to Beas, which is the HQ of Radha Swami Satsang. The couple is a believer in the Sang and its ideals.

The obsession is TWO real! 🚜🚚 #happybirthdayzain

During an AMA on Instagram, Mira had revealed the Zain is the mischievous kind while Misha is a sweetheart. We wonder if he gets this from his father, Shahid Kapoor.

(The above story first appeared on LatestLY on Sep 05, 2020 01:25 PM IST. For more news and updates on politics, world, sports, entertainment and lifestyle, log on to our website latestly.com).