Has Bollywood actor Shahid Kapoor already signed a big-budget film after Jersey? Well, as per a report, the good looking lad will soon be seen in Rakeysh Omprakash Mehra's next which will be based on Mahabharata. The Jersey starreportedly will play the role of Karna in this one. 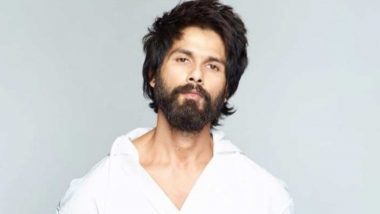 Has Bollywood actor Shahid Kapoor already signed a big-budget film after Jersey? Well, as per Bollywood Hungama, the good looking lad will soon be seen in Rakeysh Omprakash Mehra's next. If reports are to be believed, then Shahid will be seen playing the role of Karna, as the flick will be an adaptation of Mahabharata. Reportedly, the project's story is will focus on Karna. the spiritual son of Surya and Duryodhana’s friend. However, it is unclear that will the movie have a modern twist to the mythological tale or will the makers stick to the original narrative. Jersey To Release In Diwali 2021! Shahid Kapoor’s Film To Hit The Theatres On November 5.

As per the portal, Rakeysh Omprakash Mehra always wanted to make a film on Karna and finally, his dream will soon become a reality. Further, the report also adds that it is Ronnie Screvwala who will produce the Karna tale and for now on is tentatively titled as Karna. This one is also said to be quite an expensive project. All that being said, there has been no official confirmation on this by the director nor the actor. Shahid Kapoor To Start Shooting For Raj & DK’s Web Series In January 2021?

FYI, while Shahid Kapoor has had his lows, he is still loved as an actor who made his way into the hearts with his debut film Ishq Vishk (2003). However, it was his recent superhit movies Padmaavat and especially Kabir Singh, that gave his career a boost.

Workwise, Shahid was last seen in Kabir Singh and will be next seen in the Hindi remake of Telugu film Jersey that is going to release in Diwali 2021. He has also signed a web show with The Family Man directors Raj & DK. And if true then he has Rakeysh Omprakash Mehra’s Mahabharata adaptation. Stay tuned!

(The above story first appeared on LatestLY on Jan 17, 2021 05:48 PM IST. For more news and updates on politics, world, sports, entertainment and lifestyle, log on to our website latestly.com).