Shraddha Kapoor will play naagin in one of her upcoming movies and so, we thought we will take you on a tour of other actresses who played the same role in movies. Do read till the last and be shocked! 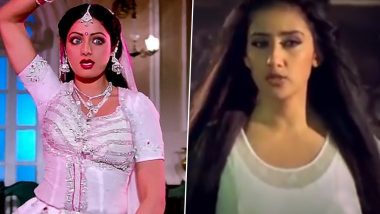 Presently, Indian Television is plagued by all kinds of members from the animal kingdom and the most favoured one is icchadhari naagin or shape-shifting snakes. Naagin is one of the most popular shows on TV which has been bringing in seasons as nobody's business. Now we hear Shraddha Kapoor too will play a naagin in a movie. She was already seen prepping to be a Chudail in Stree and now Naagin. Guess she has a thing for supernatural characters. But this isn't the first time that snakes became protagonists in movies. We all have grown up watching Sridevi dance hypnotizingly well in the song Mein teri dushman from Nagina. Confirmed! Shraddha Kapoor To Play Naagin On The Big Screen; Lapachhapi Director Vishal Furia To Helm The Film

Again, she wasn't the only one even when Sridevi is the one actress we remember the most when we say Naagins in movies. Today, we list the other actresses and a few male exceptions who played the role of a shape-shifting character.

Nagina saw Sridevi as Rajni who marries a human to avenge the death of her spouse. Her dance on Mei teri dushman is still etched in our memories. The film became such a big hit that it spun a sequel as well but the latter drowned.

Bollywood is obsessed with Naagins taking revenge and Reena Roy's Nagin was just an extension of the same. A group of men kills her spouse during a hunting party and she switches between various humans to exact her revenge. Roy did a fantastic job as a woman with a mission.

Rekha teamed up Jeetendra to become icchadhari snakes in this film. She does more than just that and the movie is not just another Naagin tale of revenge. What a relief!

Again the mani is of utmost importance here for the evil ones to harness ultimate power. This has been a recurring theme in all Naagin movies apart from the woman taking revenge. Meenakshi gets caught in this mess as a serpent here.

We all hate to love Jaani Dushman: Ek Anokhi Kahaani, the 2002 version. It was stuffed with a lot of big names from Akshay Kumar to Sonu Nigam but at the crux, it was all about revenge. Here, a male snake does the honours. Manisha in her previous birth was an incchadhari naagin who was cursed. We all like the movie for being so extra about everything that it's painful.

Foreigners have looked at India as the land of elephants and snake charmers for decades. So they spun a movie around that. Hissss is Mallika's one of the few Hollywood movies that people still talk about. It is an endless tale of looking for mate, mani and mating. Oh did we tell you, this movie has Irrfan Khan in it? Now we did.

Aamir Khan in his early career has done movies that make anyone cringe. One of them was Tum Mere Ho where he played a snake-charmer. The movie had Kalpana Iyer as the mother snake and how she influences the narrative. There is nothing good to write home about this movie or the actors in it. No offense!

Now coming to a few non-honourable male mentions in the list and you will be shocked to know Akshay Kumar is part of it. Yes, the actor played a shape-shifting snake in Hatya while Armaan Kohli did the same in Jaani Dushman.

(The above story first appeared on LatestLY on Oct 28, 2020 01:01 PM IST. For more news and updates on politics, world, sports, entertainment and lifestyle, log on to our website latestly.com).