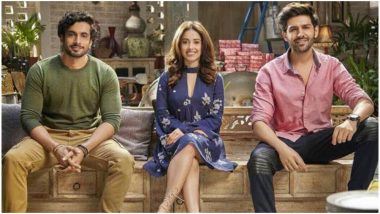 Luv Ranjan's latest anti-romcom Sonu Ke Titu Ki Sweety is becoming a rage at the box office these days. Even in its second weekend, the movie is managing to beat this week's big release, starring an A-lister. But before we talk about that, let's give you a brief about why Sonu Ke Titu Ki Sweety is drawing in the crowds. For one, the humour, even if dragged and sometimes stale, has managed to work its magic over the younger viewers. The songs are hits, and the movie, starring Kartik Aaryan, Nushrat Bharucha and Sunny Singh in the lead, is quite the decent entertainer.

Sonu Ke Titu Ki Sweety, made on a budget of Rs 40 crore, has crossed Rs 50 crore mark two days back and is now a certified hit. And now it has no plans to stop. On its second Saturday, the movie has collected Rs 6.55 crore at the box office. This is definitely better than the first Saturday collections of Anushka Sharma's horror film, Pari, that earned Rs 5.47 crore. As per trade analyst Taran Adarsh, Sonu Ke Titu Ki Sweety has earned Rs 58.32 crore till now.

The reason why Sonu Ke Titu Ki Sweety is enjoying the love of the masses than the more critically acclaimed Pari is that it is a more audience-friendly mainstream movie. Pari, unlike some of our other horror movies, is not an easy watch and has some disturbing, gory scenes. This may actually repel the some sections of the audience who don't have the stomach  for such scenes.

So which of these movies impressed you more - Pari or Sonu Ke Titu Ki Sweety?

(The above story first appeared on LatestLY on Mar 04, 2018 03:56 PM IST. For more news and updates on politics, world, sports, entertainment and lifestyle, log on to our website latestly.com).