Sooryavanshi: Karan Johar Not Dropped as a Producer From Akshay Kumar Starrer 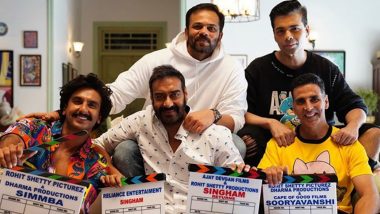 An unconfirmed report that had gone viral on Wednesday suggesting Karan Johar has been dropped as co-producer of the much -hyped Akshay Kumar-starrer "Sooryavanshi" has been refuted as fake news by the makers. Late on Wednesday, social media was abuzz with reports that the film's director Rohit Shetty and lead star Akshay Kumar have dropped Johar's Dharma Productions and its share from the film, further claiming that they had even returned Johar's investment in the film. Soon, the film's producers and presenter Reliance Entertainment were confirming that the news doing rounds of Johar not being part of "Sooryavanshi" is incorrect. Have Akshay Kumar and Rohit Shetty Dropped Karan Johar From His Producer’s Role on Sooryavanshi? Here’s the Truth!

Trade expert Taran Adarsh also tweeted: "IMPORTANT... News doing the rounds of #KaranJohar not being part of #Sooryavanshi is untrue, clarifies #RelianceEntertainment." The news comes a day after it was announced that the film will release in theatres during Diwali this year. In "Sooryavanshi", Akshay will be seen as ATS officer Veer Sooryavanshi, on a lookout for terrorists planning a deadly strike on Mumbai. Ajay Devgn and Ranveer Singh will also reprise their roles of Singham and Simmba in cameos, to help Akshay bust the terror plot. Sooryavanshi And ’83 To Get A Theatrical Release; Box Office Collection Could See A Jump Of 20% More Than Pre-COVID Days?

IMPORTANT... News doing the rounds of #KaranJohar not being part of #Sooryavanshi is untrue, clarifies #RelianceEntertainment. pic.twitter.com/0IT9qnNdyS

(The above story first appeared on LatestLY on Jul 02, 2020 11:33 AM IST. For more news and updates on politics, world, sports, entertainment and lifestyle, log on to our website latestly.com).