Stree is an entertaining mix of humour and scares, especially the former in big doses. 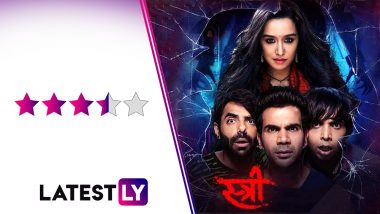 At least once in our lifetime, we must have heard that cautionary tale from that one weird uncle or aunt about not venturing in the night. And if you take that risk, then don't turn back if someone calls you from the behind. If you do, then you are doomed! Every village has such stories, and we even have shows like Zee Horror Show and Aahat that had episodes based on such tales. Now we have Stree, written by the Go Goa Gone duo, Raj Nidimoru and Krishna DK, and directed by debutante Amar Kaushik, based on the same legend. Only in the case, the setting is not just about the scares. Stree delivers laughs in more doses, making for a really entertaining film.

Talking about the premise, the movie is set in a village called Chanderi, where a supernatural entity called Stree hounds and abducts men during a four-day pooja period, that too in a bizarre manner. To ward off the evil spirit, there has been 'O Stree Kal Aana' graffiti written all over the walls. However, the youngsters think this is a myth, like Vicky (Rajkummar Rao) the village's super-talented tailor who can take measurements of the ladies just with his eyes. He meets a mysterious nameless girl (Shraddha Kapoor) during the recent pooja and falls for her. At the same time, Stree has started abducting people in his village. So who is this Stree? And what does she want with the men whose clothes she leaves behind? Has she something to do with Vicky's mysterious obsession?

Horror comedy is a tricky genre to make, as there should be a nice balance between the laughs and the scares. Some of the favourites in the genre had been films like Zombieland, Shaun of the Dead and This is the End. Closer home, Raj & DK's own Go Goa Gone is a near worthy addition, and I can also refer to an Ashok Kumar film called Bhaago Bhoot Aaya. There hasn't been a standout entry here, so expectations are high from me for Stree, considering the talent involved.

Sorry for digressing into a fanboy mode, but I have been an admirer of Raj & DK's films right from the time they made the American desi film, Flavours. 99 still remains my most favourite film of theirs, while Go Goa Gone has been an underrated gem. What I liked the most about the films is how these two write their characters and the humour, which is intelligent and goes meta on occasions. Happy Endings and A Gentleman were disappointments for sure, but at times, both the films showed sparks of their brilliant wit. Something Stree as a movie benefits from a lot. And even though Raj & DK are not directing the film, they have found an able director in Amar Kaushik, who has won a National Award for his short film.

Stree, for most of its portions, is taut and sticks to its main premise without major distractions. Even the songs don't act as a deterrent in the narrative. The rural setting works well as a tribute to those Ramsay movies of the '80s. The interactions between Vicky and his friends feel very natural and something any boy gang can relate to. Unlike Go Goa Gone, Stree is too well-rooted in desi flavours which could help the film connect with the mainstream audiences. After all, chudails hits closer home than zombies, don't they?

What works best for the film is the humour, with most of the jokes landing nicely. There are some really clever gags in here. Stree boasts of one of the funniest sex education talks seen in recent times. There is another brilliant gag on Mission Impossible iconic tune. Or should I talk about Rudra (Pankaj Tripathi)'s subversive take on PINK's popular dialogue that will make anyone cheering for women's rights clap out loud? Not spoiling too much for you, but Stree scores big time in the humour department, at least.

The horror part, however, is more of a mixed bag in my view. The scary scenes are fine, though the jump scares become a bit too much. The second half feels a bit weaker, though it benefits a lot from the expanded presence of Pankaj Tripathi. More on this man later. The VFX is decent though. The conclusion is rather simplistic and weird - it leaves you with more questions than offer an interesting discussion point.

Even Shraddha Kapoor's character underwhelms. She was fine when the movie maintains her mysterious persona, but once the shroud is taken off, she, more or less, ends up like Saif Ali Khan's Boris from GGG - intriguing but loses steam later. The twist in her arc towards the end makes little sense.

Go Goa Gone had the message that drugs are bad. In Stree, it is about women empowerment, through the entity's haunting of the men in the village and how it is the women who feel safer in Chanderi. I do wish, though, if the makers could have restrained themselves into pushing this message too much in our face at times and let us seek the message through some of its less suggestive but satirical nuggets.

All the actors in Stree are damn terrific and scene-stealers in their own rights. Rajkummar Rao, revelling in his recently found comic streak, is once again excellent as the goofy tailor with a romantic streak. The way in which he fast-talks his way to impress the girl or ape Shah Rukh Khan in a very crucial moment, Rao will make more fans with this performance. It is also refreshing to see that his character doesn't develop a superhero streak all of a sudden near the end, as he needs saving during life-threatening moments.

Even though I felt the movie could have done more with her character, Shraddha Kapoor manages to bring that seductive, mysterious allure to her act without going overboard.

Pankaj Tripathi is terrific. Every scene he is in is a scream, thanks to his dry delivery of quips and impeccable comic timing. Aparashakti Khurana and Abhishek Banerjee, who play Vicky's friends, have sizeable roles in the film and they are just too good. Aparashakti has some really wonderful lines that he does justice to, while Abhishek is the surprise package of the film. Atul Srivastava, who plays Vicky's father, is another fine actor. Vijay Raaz in a cameo makes limited impact.

- The humour and the writing

- The writing and the direction

- The climax is a disappointment

- Shraddha's character is a slight letdown near the end

- Relies too much on jump scares

Stree is an entertaining mix of humour and scares, especially the former in big doses. All the actors have done an amazing work in making you laugh, while there will be some scenes that will make you jump from your seats. Go for it!

(The above story first appeared on LatestLY on Aug 31, 2018 01:46 AM IST. For more news and updates on politics, world, sports, entertainment and lifestyle, log on to our website latestly.com).