Street Dancer 3D's new song Garmi will definitely heat up your screens as Nora Fatehi dances like a dream here. But it's her chemistry with Varun Dhawan which will leave you impressed much more. 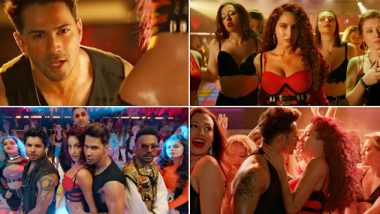 Varun Dhawan and Nora Fatehi had been teasing their fans with small tidbits from their song Garmi from Street Dancer 3D for two days. Yesterday, the teaser was out and it left many asking for more. Now we have the whole song and we can say it is aptly titled Garmi. Varun and Nora have really hot chemistry and that oozes out well in the song. Although the song is a bit of a downer as it's rap with no melody, the way Nora moves is a treat to watch. Varun obviously does a good job but it's the camera work at a few places that will impress you more. Street Dancer 3D: Nora Fatehi Sizzles Even in Mere 20-Seconds-Long Garmi Teaser With Varun Dhawan (Watch Video)

After Muqabla which became an instant favourite for obvious reasons, Garmi has been launched at the right time to tap the New Year's Eve celebrations. After all, what's a dance number if it's not played at the pubs and discos.

Watch The Song Garmi From Street Dancer 3D Below:

Street Dancer 3D has the India-Pakistan rivalry at the midst of everything else. It is definitely a nice change to see the rivalry pan out on a dance floor rather than on a cricket field or at the border. The film releases on January 24, 2020.

(The above story first appeared on LatestLY on Dec 26, 2019 11:58 AM IST. For more news and updates on politics, world, sports, entertainment and lifestyle, log on to our website latestly.com).