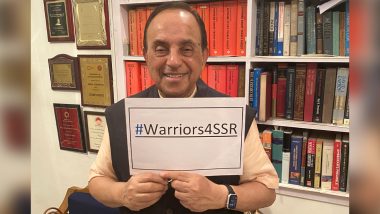 Sushant Singh Rajput's demise on 14 June, 2020 has raised many questions. The actor's tragic death case is taking new turns on daily basis and thorough investigation is underway. Amid this, netizens are demanding justice in the case and have been voicing about on social media. Subramanian Swamy and lawyer Ishkaran Singh Bhandari's were also actively participating in the demand. Now, Bhandari initiated a new digital protest called as #Warriors4SSR. The politician also joined the protest by holding the placard. Sushant Singh Rajput Death Probe: Rhea Chakraborty Appears Before ED in Money Laundering Case.

He posted the picture of himself holding the placard that had #Warriors4SSR written on it. Earlier, he had hinted about the same in the tweet saying, "At sharp 8 pm I will with Ishkaran post a picture on Twitter: justice for SSR." Check out the tweet below.

On the other hand, recently, Rhea Chakraborty, accused of abetting suicide of actor Sushant Singh Rajput, appeared before the Enforcement Directorate (ED) on Friday. The late actor's girlfriend arrived at the agency's office in the Ballard Estate area here, accompanied by her brother Showik in connection with the money laundering case.

(The above story first appeared on LatestLY on Aug 07, 2020 09:00 PM IST. For more news and updates on politics, world, sports, entertainment and lifestyle, log on to our website latestly.com).