Popular film critic Rajeev Masand has been called in for interrogation by Bandra police station with regards to Sushant Singh Rajput's suicide case. Read on. 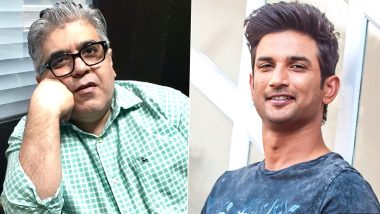 Sushant Singh Rajput's death by suicide sparked the nepotism debate once again and many bigwigs were called out for being responsible for the Dil Bechara actor's death. After the same, many Bollywood celebs have been summoned by the Mumbai police and questioned with regards to Sushant's untimely demise. And now, as per the latest reports doing rounds, it's popular film critic and journalist, Rajeev Masand who is summoned by the police in connection with the late actor's suicide case. Masand has been called for interrogation as he has been accused of giving negative ratings to a few of Sushant's films. Salman Khan Will Not Be Questioned by Mumbai Police in Sushant Singh Rajput Suicide Case.

Earlier, many Bollywood celebs have called out Rajeev for churning blind items hinting at Sushant. Kangana Ranaut, Manoj Bajpayee, Apurva Asrani have slammed the well-known journo for the same. Quoting Asrani's tweet he had written, "Attacking soft targets like KRK, while keeping mum on the more powerful 'blind item' experts is sheer hypocrisy. KRK is vile, but at least has the guts to put his name to his opinions. Rajeev's blind items against #SushantSinghRajput are vicious & cowardly. Don't be selective." Aligarh Writer Apurva Asrani Feels Attacking Soft Targets like KRK is Sheer Hypocrisy, Suggests Tagging a Popular Film Critic and His Blind Items as also the Culprit.

Also, till now celebrities like Sanjay Leela Bhansali, Sanjana Sanghi, Sushant's girlfriend Rhea Chakraborty, Shanoo Sharma and more have been quizzed by the Bandra police. However, the most recent one was Aditya Chopra, who was interrogated on Saturday. Sushant Singh Rajput died on June 14. Stay tuned!

(The above story first appeared on LatestLY on Jul 21, 2020 12:08 PM IST. For more news and updates on politics, world, sports, entertainment and lifestyle, log on to our website latestly.com).