Southern star Tamannaah Bhatia says the remuneration an actress gets for working in a film is entirely her "prerogative to determine her financial worth", adding that the choice to re-consider the remuneration also lies with her. 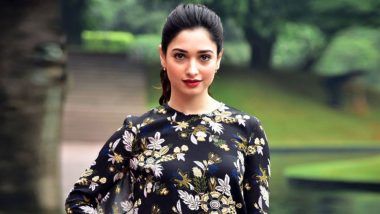 Mumbai, May 21: Southern star Tamannaah Bhatia says the remuneration an actress gets for working in a film is entirely her "prerogative to determine her financial worth", adding that the choice to re-consider the remuneration also lies with her.

"Remunerations is entirely an actresses' prerogative to determine her financial worth and the choice of re-consideration on the remuneration rests finally with her and nobody else," Tamannaah said on the subject of what actresses are paid.

"We need to demolish these unbiased perceptions of an actress not deserving remunerations in higher brackets similar to an actor. Why is it that the same questions are never raised when it is pertaining to an actor? As an integral part of the film industry, actresses too, have worked very hard to reach where their destinations and every film needs a female lead just like a male lead to be successful. Why can't a female actress enjoy the tag of being the highest paid or is it just a male entitlement? New decade, new mindset, new rules is the order of the day," she added.

On the other hand, the actress also refuted reports claiming that she refused to essay the role of Ravi Teja's love interest in director Trinadh Rao's upcoming comedy drama, which is backed by People Media Factory. The report stated that she quoted Rs 2.5 crore to romance the star and producers backed out.

Talking about the speculative piece, the "Baahubali" star said: "I have an issue with speculative stories especially when it's concerning my work which I consider as worship. I've never been the type to entertain any sort of grapevine during my career trajectory."

"There is no truth to these fictitious stories of detrimental nature that are being planted constantly against me and seem to be a figment of someone's imagination. The production house is still very much in touch with my management team and we are hoping to take a decision once life returns to some sort of normalcy. Unfortunately, all negotiations and discussions which started in February were kept on hold by the production house due to the outbreak of COVID-19. We are living in uncertain times and I don't see any films going on floors till safety and health measures are fully in place. I am very professional in all my film dealings and the question of rejecting a film opposite Ravi Teja is out of the question given my cordial working relationship with him. I would like to do another 10 films with him given a chance," she added.

(The above story first appeared on LatestLY on May 21, 2020 09:03 AM IST. For more news and updates on politics, world, sports, entertainment and lifestyle, log on to our website latestly.com).