The Girl on the Train Review: A ‘Train Wreck’ or an ‘Earnest Effort’; Here’s What Critics Have to Say About Parineeti Chopra’s Film

The film revolves around the story of Parineeti Chopra who plays the role of an eponymous girl taking the train, an alcoholic divorcee, who becomes involved in a missing person investigation and uncovers deeper secrets. 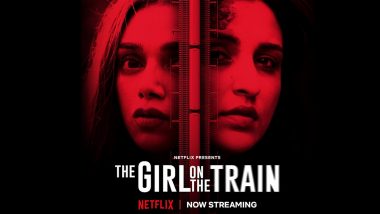 Bollywood adaptations are a risky business and The Girl On The Train director Ribhu Dasgupta took this challenge with a stride. He along with the lead cast including Parineet Chopra, Avinash Tiwary, Kirit Kulhari and Aditi Rao Hydari worked together on the Hindi adaptation of the 2016 released Hollywood film. The team has been promoting the film with full zest and have finally handed over the film to the audience for them to enjoy. The Girl On The Train premiered on Netflix today (February 26) and people have been talking about it ever since then. The Girl on the Train Movie Review: Parineeti Chopra’s Netflix Thriller Is a Shallow Remake With a Surprise End-Twist.

The film revolves around the story of Parineeti Chopra who plays the role of an eponymous girl taking the train, an alcoholic divorcee, who becomes involved in a missing person investigation and uncovers deeper secrets. Avinash is seen essaying the role of Parineeti's husband while Aditi Rao Hydari is essaying the role of Nushrat, the girl Parineeti's character Mira Kapoor is obsessed with. Kiriti Kulhari essays the role of the detective who investigates Aditi Rao Hydari's murder. The trailer was quite impressive, leaving many speechless. Now let us see if the film also had the same effect on critics.

Check Out What Critics Had to Say About Parineeti Chopra’s Film:

Times of India: The Girl On The Train is an earnest effort at reconstructing what is perceived as a cult-classic-in-the-making and the hard work the entire cast & crew has put in is palpable. A lit more unabashed approach – like losing the love ballads and that disc song – coupled with sharper snipping tools could have made this rendition Bollywood’s befitting answer to its Hollywood counterpart.

Scroll.in: The palpable disinterest in characterisation and motive washes over nearly everybody in the 120-minute film, from Parineeti Chopra’s unconvincing shambolic heroine to Kirti Kulhari’s purposeful policewoman. The London setting serves no purpose except to underscore the British tendency for understatement. Rather than a psychological drama about a woman who is lost and finds herself again through sheer willpower, Dasgupta’s The Girl on the Train stumbles about thriller territory. The Girl on the Train Trailer: Is Parineeti Chopra a Murderer or Not? Watch the Actress Take You On ‘One Hell of a Ride’.

Filmfare: Like Emily Blunt before her, Parineeti Chopra has given her all to the film. Her commitment to the project can’t be denied. She's the best thing about the film and gamely soldiers on but there’s only so much an actor can do on her own. Her efforts are to be lauded but she’s hugely let down by the weak writing and the direction. It seemed as if the director was plain unwilling to work with the material at hand and wanted to introduce his own version of events.

Sreeju Sudhakaran from Team Latestly also reviewed the film and said, "If you have read the book or seen the Hollywood adaptation (which I am told is quite faithful to the novel), you will be disappointed at how unimpressive the Hindi remake turned out to be. Aiming to impress with solely with its illogical twists, the Parineeti Chopra-starrer turns out to be a shallow version of an already average work."

(The above story first appeared on LatestLY on Feb 26, 2021 07:05 PM IST. For more news and updates on politics, world, sports, entertainment and lifestyle, log on to our website latestly.com).