Udit Narayan Birthday Special: 10 Songs Of The Singer That're Favourites Of Every Generation

Udit Narayan celebrates his birthday today. Here are 10 songs of the singer that will never fail to spin magic on you. 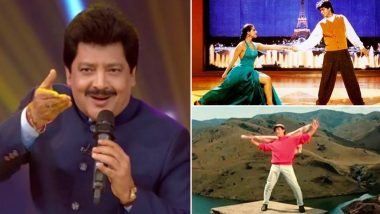 Anyone who lived in the 90s and loved Bollywood can never get over it. Not because it had incredible movies but because it is one of the golden periods of Indian music. Although not all original, they really made our lives extremely melodious. So when we say Udit Narayan, all those people will promptly sing Pehla nasha! That slow-mo, Aamir Khan in a red sweatshirt, Ayesha Jhulka daydreaming in class, and Udit Narayan's enticing voice...90s was super fun! So on his birthday, we decided to pick 10 favourite songs of his for the generation who doesn't know why he is still so relevant. Udit Narayan: People Talk of Nepotism, My Son Has Launched Me in the Digital Age

Back in the 90s, not singing and dancing on Papa kehte hai during farewells at school was considered a crime. It was the anthem! Udit Narayan's voice so unique blended with the mannerisms of Aamir Khan that we could never differentiate between the two.

The touch of first love, first crush and first confession are so beautifully voiced by Narayan in yet another Aamir song from this fantastic movie is still a favourite of everyone.

Do we even need to talk about what a guilty pleasure this song is? Narayan kept it playful and whacky just like Shah Rukh Khan on screen.

Biju's music was anyway electrifying which only sounded great with Narayan's flirtatious vocals. This is legendary!

It's so difficult to explain what these songs mean to people like us. They are our entire childhood. This song is sung by Udit Narayan, Alka Yagnik and Sapna Awasthi and is basically a love confession with lots of tears. Now you know why Karisma Kapoor was wearing glares at night.

A slow and lilting song in Narayan's voice was such a soothing balm.

It's a love story in a song and is so beautifully rendered by Udit Narayan and Alka Yagnik that you would want to fall in love now!

Govinda and Karisma Kapoor dancing on the streets of Switzerland looking oh-so-RAD. Udit Narayan does a superb job fusing his voice with Govinda's mannerisms.

Many had a collective heartbreak when they heard this from Udit Narayan and saw Salman cry on camera.

This song is every bit romantic as Udit Narayan can get but given the film was a horror one, it does sound quite eerie.

On his special day, just enjoy these glorious melodies from the 90s that Udit Narayan sang like a boss!

(The above story first appeared on LatestLY on Dec 01, 2020 08:40 AM IST. For more news and updates on politics, world, sports, entertainment and lifestyle, log on to our website latestly.com).