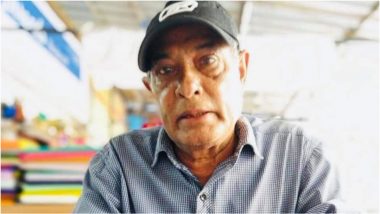 Veteran lyricist Anwar Sagar died on Wednesday. He breathed his last at Mumbai's Kokilaben Hospital. The cause of Anwar's death is not yet reported.

The artist has worked with music directors like Nadeem-Shravan, Rajesh Roshan, Jatin-Lalit and Anu Malik. He was a mildly popular name in the '80s and '90s. The song credits for the lyricist pop up in movies like Yaarana, Salaami, Aa Gale Lag Jaa and Vijaypath among more. Anwar Sagar has also penned down the lyrics for 'Yeh Dua Hai Meri' from the movie Sapne Sajan Ke, which featured Karisma Kapoor and Rahul Roy.

Here Is An Old Video Of Meiyang Chang Crooning The Song:

It has been a sad year for the world and the entertainment industry. Two days back, popular music composer Wajid Khan (of Sajid-Wajid) passed due to a cardiac arrest. He was tested positive for COVID-19.

On May 29, veteran lyricist Yogesh Gaur died at the age of 77.

(The above story first appeared on LatestLY on Jun 03, 2020 04:34 PM IST. For more news and updates on politics, world, sports, entertainment and lifestyle, log on to our website latestly.com).