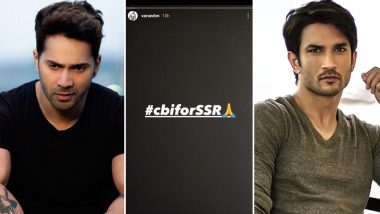 Dil Bechara actor Sushant Singh Rajput's death mystery still continues. Reportedly, the actor died by suicide on June 14, 2020, but his fans and family have a different take on the same. Amid this, it was SSR's sister, Shweta Singh Kriti who took to her social media and shared a clip stressing on the importance of CBI probe into the case with an aim to know the truth. Right after the same, many Bollywood biggies joined the league and started sharing their version of #CBIForSSR. Varun Dhawan, Kriti Sanon, Sooraj Pancholi, Parineeti Chopra were a few names who urged for CBI inquiry into Sushant’s death. However, looks like Twitter was not happy with Dhawan's this gesture, as netizens started to troll the star kid on the micro-blogging site. Kriti Sanon on SSR Case: ‘I Hope and Pray That the CBI Takes Over, So It’s Investigated Without Any Political Agendas’.

From slamming the actor for being a product of nepotism to even calling out him for showing kindness towards SSR just because Sadak 2 trailer was a major flop. That's not it, as a few also highlighted how Dhawan is being nice now as his movie Coolie No 1 is on its way. Well, the reactions are indeed an outcome from anger and here are few below. See for yourself. Sushant Singh Rajput Case: Late Actor’s Sister Shweta Singh Kirti Demands CBI Enquiry from PM Narendra Modi and HM Amit Shah (Watch Video).

Those who think #VarunDhawan Urged 4 justice bcz he like SSR are Clowns. He is doing all these bcz of Trailer of Sadak 2. Very soon Star kids gonna get what they deserve.

Where was @Varun_dvn from past 60 Days?

Wow....#varundhawan did you think we will fall in your trap! Man I suggest you to leave your career in Bollywood and live happily because we are not interested in your films if we say

We boycott Bollywood then we won't change. Your Instagram story is a fake #CBIForSSR pic.twitter.com/HDqu0HjLKe

#VarunDhawan Huhh..It seemed he is scared and tensioned after seeing the audience power in case of sadak2 !

Well its your trick or you did genuinely god knows!

What do you think is this Varun Dhawan trap ? pic.twitter.com/P5NO5Zr5p4

Definitely he is trying to get soft corner of audience.

I wish you could act so good in your movies too #VarunDhawan pic.twitter.com/1hHZdI1ODx

For the unversed, star kids have been on the receiving end after Sushant Singh Rajput's untimely demise. The reason for the same is that they are a product of nepotism. Meanwhile, Varun's next happens to be his father David Dhawan's directorial Coolie No 1 opposite Sara Ali Khan. Stay tuned!

(The above story first appeared on LatestLY on Aug 14, 2020 10:57 AM IST. For more news and updates on politics, world, sports, entertainment and lifestyle, log on to our website latestly.com).