As the National Film Awardee Varun Grover celebrates his birthday today (January 26), we take a look at some of his fun stand-up comedy acts that will make you smile, giggle and laugh. Check it out. 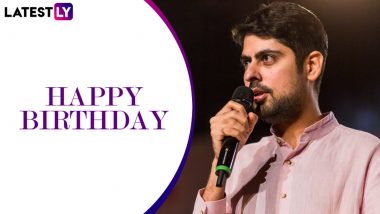 Making a huge crowd LOL is not an easy task, but then there are a few Indian stand-up comedians who do this with utmost ease. Among them is Varun Grover, who has been making people smile, giggle and laugh since quite a long time. A graduate in civil engineering from Varanasi, who knew that one fine day, he would turn into a popular personality in showbiz. Case in point, Varun's comedy act revolves around the ongoings in the society which are hilarious and also gives a reality check. Varun Grover Birthday Special: Moh Moh Ke Dhaage, Jabra Fan, Ud-Daa Punjab – 5 Best Songs of This National Award Lyricist That Prove His Versatility!

Apart from being an ace comedian, Grover is also a lyricist, who has given us some great melodies like 'Moh Moh Ke Dhaage' and more. With this, he has proved that he's definitely a multi-talented lad who keeps growing all day, every day. And as he celebrates his birthday today (January 26), we take a look at some of his best stand-up acts which are worth your time. Eternals Theme Music Inspired by a Salman Khan-Madhuri Dixit Song? Lyricist Varun Grover Points Out This Similarity and We Just Can’t Unhear It Now!

This outrageously fun comedy special, Aisi Taisi Democracy takes a dig at the Delhi Metro scenario. All the jokes in the act land extremely well and even if you happen to be in favour of the government, you would definitely laugh your heart out. Watch!

Titled Indian Elections, in this one Varun rants about the 2019 Indian elections, and his hilariously accurate analysis will tickle your funny bone. That's not it, as he also slams (in a fun way), the winning party, BJP. Have a look.

This one happens to be another gem by Grover. After watching the full video you will get an answer to why Varun ended up peeling two kgs of water chestnuts at an airport. In this one, he also questions if these checks are enough to stop a terrorist?  Here, watch it now.

The stand-up comedian in this act takes a sly dig at how a specific political party from J&K felt that the consumption of momos is venomous and is more hazardous than drugs and alcohol. He also cracks a joke involving cows. Funny!

That's it, guys! These are some of the fan faves stand-up comedy acts of Grover that are truth bombs and how. Having said that, all we wish is that he prospers in life and does more fantastic work in his field. Happy birthday, Varun Grover.

(The above story first appeared on LatestLY on Jan 26, 2022 08:20 AM IST. For more news and updates on politics, world, sports, entertainment and lifestyle, log on to our website latestly.com).