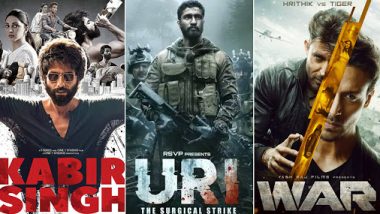 2019 fared much better than 2018 in terms of making money at the box office. As per Bollywoodhungama, while last year, Bollywood earned Rs 3609.32 crore, this year the industry has already pocketed Rs 4152.16 crore and counting. So when the Trade pundits argued that economic slump has hardly affected the industry, they weren't bluffing. So it becomes imperative that we list down the movies that need to be credited for the same. Year Ender 2019: From Alia Bhatt’s Kalank to Salman Khan’s Dabangg 3, 11 Bollywood Movies That Disappointed Us the Most in 2019

But before we do that, we have to tell you something with a heavy heart. None of the Bollywood movies made it to the top if we do an all-inclusive analysis this year. It's Avengers Endgame which takes the first position with Rs 373.22 crore. War, the biggest Hindi hit of this year, couldn't even come close to this magic number.

However, we are keeping this list restricted to Hindi movies only and so here are the biggest hits of 2019.

A classic cocktail of brawn, action and some really stylish moments and War became a raging hit. It also helped Yash Raj Films turn things around for itself after a disastrous 2018 with Thugs Of Hindostan. It was a holiday release which gave it a huge headstart but everything else has been earned by the film on its own stead. Hrithik Roshan and Tiger Shroff's guru-shishya gig pleased the audience and how!

An angry alcoholic doctor who hits girlfriend in the name of love created a chaos at the box office and also otherwise. While people are still debating whether or not such a film should be supported, it became a roaring success. Arjun Reddy, a film it was adapted from, was a hit too and it just got bigger with the Hindi version. Shahid Kapoor finally proved to everyone he is enough to make a film a Rs 200 crore success.

Uri-The Surgical Strike had nationalism written all over it which helped the film scale major heights. The film opened slow which was expected because it didn't have a big star in the lead but Vicky Kaushal. But what's interesting is that the film started to pick up tremendously after its first week. The word of mouth was very strong around the film which fetched it good numbers.

Salman Khan is getting a bit rusted since a few years now. Be it his choice of movies or his incessant need to stick to the formula, the man's box office fortunes are slowly depleting. After Race 3, Bharat was supposed to turn things around for him but despite earning over Rs 200 crore, people weren't too happy with him.  After all, a Rs 300 crore hit machine can't go wrong with his prized holiday release. Year Ender 2019: Hollywood’s Year of Superheroes and Nostalgia

A lot has been said about Housefull 4 and its box office numbers. As per the makers, the film has made Rs 200 crore but many believe the film hasn't made that much. It has been clouded with controversy from day one when the numbers weren't as it was predicted. And to think of it, this was a Diwali release.

Mission Mangal became Akshay Kumar's first Rs 200 crore film. His nationalistic takes in movies have earned him rich dividends and MM proved it further. The film took a huge opening as well with over Rs 29 crore. It's his biggest first-day number as well.

Another film of Akshay Kumar with nationalistic flavour, Kesari released early this year and swept box office of its feet. It was a Holi release and made the most of it.

Total Dhamaal is yet another multi-starrer comedy that made heads turn. The film started really well at the box office and kept the momentum going for a lot of weeks.

The biggest surprise of this year was Chhichhore. This feel-good movie about life in hostels got so much love from the audience that it clocked over Rs 100 crore. In fact, the film picked up pace after its first week with a very strong word of mouth working in its favour.

Saaho is yet another film that was embroiled in a controversy of fudged box office numbers. It was Baahubali Prabhas' Hindi debut film and it did pretty well at the box office.

(The above story first appeared on LatestLY on Dec 31, 2019 11:00 AM IST. For more news and updates on politics, world, sports, entertainment and lifestyle, log on to our website latestly.com).