Butter: Here Is Everything We Know About BTS’ Upcoming Song

Titled Butter, many details about the song have been shared with the fans. A teaser video, where we saw butter melting for hours, was also released to tease the fans a few weeks ago. 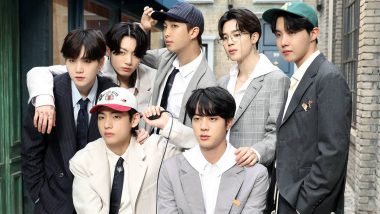 BTS enjoys a fandom like no other boy band. They have a fan following all across the world, and a term has even been coined for their fan called BTS Army. Their songs create history quite often and Korean band is always working towards making new music for their fans. After the massive success that Dynamite got, BTS announced that they will be coming up with the next song soon. BTS Is Time’s Entertainer of the Year & ARMY Can’t Keep Calm! K-Pop Fans Congratulate the Boy Band for Adding Another Feather in Their Cap.

Titled Butter, many details about the song have been shared with the fans. A teaser video, where we saw butter melting for hours, was also released to tease the fans a few weeks ago. The video became one of their most viewed videos on Youtube. The Grammy-nominated South Korean super band BTS is all set to perform their new song Butter at the upcoming Billboard Music Awards, and fans cannot wait to see BTS take the stage over.

While the performance is due till May 23, we take a look at everything we know about the song.

Butter will be the K-Pop group’s second English-language single. The first song that they created was the uber-popular Dynamite. The song became the most-viewed music video in 24 hours and also gave BTS their first Grammy nomination. It is being anticipated that Butter, too, will break a few records of its own.

The Team Behind Butter

While BTS is the face of the song, there are many people behind their successful songs. Just how David Stewart and Jessica Agombar wrote Dynamite, Jenna Andrews along with Alexander Bilowitz and Sebastian Garcia have penned down the lyrics of Butter. Big Hit Music, the South Korean entertainment company that manages BTS, and Sony Music Entertainment are backing the song.

BTS has already shared photos and teaser of the song with their fans. The teaser photo created quite a stir after seeing Jin, Suga, J-Hope, RM, Jimin, V and Jungkook in their new looks. The teaser promises a groovy, catchy and upbeat song beat which resemblance with the iconic British rock band Queen’s song Another One Bites the Dust.

It is being reported by K-Media that "a new album containing a variety of new songs including the pre-released single Butter is expected to be released in coming June." BTS V Is Valentine Week 2021 Crush of the Day: ‘We Purple You,’ Bold and Sexy, Kim Taehyung Is K-Pop ARMYs Most Precious Eye Candy.

BTS made the announcement a few days back that they will be performing their song Butter at the upcoming Billboard Music Awards. The group made the announcement on their official Twitter handle on Tuesday. "We can't hold it in any longer! Our debut performance of '#BTS_Butter' will be at this year's @BBMAs! Watch on Sunday, May 23rd at 8pm ET/5pm PT on @nbc," they wrote on their official page, with the hastags #BTS and #BBMAs.

The group has four nominations at this year's BBMAs. These are - Top Duo/Group, Top Song Sales Artist, Top Selling Song ('Dynamite') and Top Social Artist (Fan Voted). The Billboard Music Awards will be held on May 23 and hosted by Nick Jonas. Canadian singer The Weeknd leads with 16 nominations. Rapper Drake will be felicitated with the Artist of the Decade Award this year.

(The above story first appeared on LatestLY on May 20, 2021 06:43 PM IST. For more news and updates on politics, world, sports, entertainment and lifestyle, log on to our website latestly.com).