Given his penchant for churning out gangster flicks, RGV has dished out some really gripping entertainers of the same genre such as 'Satya' and 'Company', but this film doesn't quite come even remotely close to those productions in terms of texture, treatment and thrills. Truth be told, the trailer doesn't offer anything innovative and looks tacky! 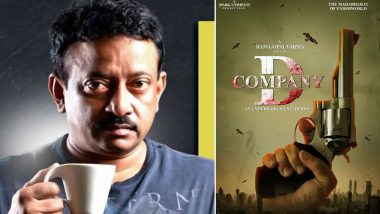 Ram Gopal Varma is back! And this time around he is back with a solid....errr bang to tout his forthcoming venture D Company to be the Mahabharat Of Underworld. "Dawood Ibrahim's vision for his company was as innovative as Bill Gates" goes one of the slides as we witness intercuts of guns, goons and gory. Now that's enough to give you a hint or two about what this drama will unfold like in the typicalRGV style! Directed by Ram Gopal Varma and produced by Spark Company , ‘D Company’ will hit the theatres in 2021.

Given his penchant for gangster flicks, RGV has dished out some really gripping entertainers of the same genre such as Satya and Company, but this film doesn't quite come close to those productions in terms of texture, treatments and thrills. Truth be told, the trailer doesn't offer anything innovative and looks tacky as indeed below average. Touted as the true story behind how a street gang in Mumbai headed by Dawood Ibrahim rose up to become the world’s most dangerous criminal organization, the trailer looks like an average affair. The film promises to be not just a biopic of just Dawood Ibrahim, but that of the entire ‘D Company’ from its initiation to its growth as the most dreaded organisation in the entire criminal history of India. Ram Gopal Varma Supports His Rangeela Actress Urmila Matondkar After Kangana Ranaut Calls Her A 'Soft-Porn Star'

“This is my dream project and my research on the subject matter of 'D Company' came from my extensive interactions over the last 20 years with gangsters to encounter cops to middlemen of the underworld and also many film people who were involved with the underworld. I have always been intrigued to tell the uniqueness of the Indian underworld and its strange and weird mix where everyone from criminals to politicians to cops to film stars were hopping into each other’s beds.” explains RGV. Murder: Ram Gopal Varma Issues Clarification On Twitter After His Web Film Lands In Legal Trouble (View Tweets)

“Though Mafia stories have been told multiple times, but the film ‘D Company’ intends to realistically capture both the characters and incidents responsible for the creation of the most powerful criminal organisation ever in India named after its leader Dawood Ibrahim, who along with his protégée Chota Rajan, held Mumbai city in an iron grip for many decades.”, he adds.

(The above story first appeared on LatestLY on Jan 25, 2021 04:26 PM IST. For more news and updates on politics, world, sports, entertainment and lifestyle, log on to our website latestly.com).