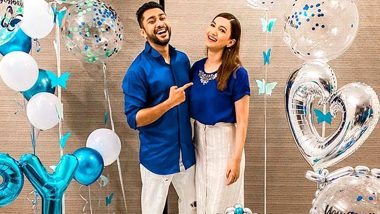 Love is in the air for Gauahar Khan and Zaid Darbar. While their mushy Instagram posts were enough to make us aware of their adorable relationship yet they weren't keen on making things official. When Gauahar was even asked if she's seeing Zaid Darbar, she asked her fans to keep guessing and not put a particular tag on their relationship. Well, guess the former Bigg Boss contestant isn't particularly fond of discussing her personal life but Zaid's father, Ismail Darbar has very much confirmed his son's budding relationship. Gauahar Khan Gets the Sweetest Birthday Wish From Rumoured Beau Zaid Darbar (See Pics).

Ismail Darbar, the famous music composer in his recent conversation with Times of India revealed how he's willing to give his blessings to the couple if they decide to settle down someday. “If Zaid and Gauahar get married, why won’t I give aashirwad to Gauahar? If Zaid wants to marry her, why would I object? Zaid is nearly 29, he knows what he’s doing. In fact, that’s exactly what Ayesha told him. She told him that if he’s happy we’re happy too, and he is old enough to decide what’s good for him," he said. Gauahar Khan Shows Why and How Black Is Beautiful!

Zaid apparently called up his stepmother, Ismail’s wife Ayesha, and told her about the relationship and the family is happy to see him with Gauahar Khan. The BB 7 winner had earlier quashed all her relationship stories by saying, "It's fine guys. You can keep guessing. Some things are personal. As long as you see two people or four people or more happy, it's fine. Let's not judge or put a tag. Let's enjoy and spread happiness."

Now that Ismail Darbar has given us the much-needed confirmation, we are nothing but excited and happy for this gorgeous couple.

(The above story first appeared on LatestLY on Sep 19, 2020 09:32 AM IST. For more news and updates on politics, world, sports, entertainment and lifestyle, log on to our website latestly.com).