10 Years Of Inception: Production Designer Weighs In On The Ambiguous Ending, Says It Was A 'Big Debate' In The Dailies 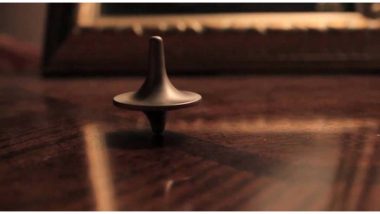 Ten years ago, Christopher Nolan gifted his fans with a visually appealing, skillfully mysterious, adequately thrilling masterpiece Inception. The movie featuring Leonardo DiCaprio, Tom Hardy, Ellen Page was a global rage. Who would not become a fan of a film about dream heist by Nolan? The movie ended on sort of a cliffhanger. The characters in the film enter their target's dreams for 'inception' of a self-destructive idea. Things go awry but the job is completed. Tenet: New Posters Of the Christopher Nolan Film Featuring an Intense John David Washington Released Ahead of Its August Release.

However, in the end, the team leader Cobb, spins a top - his totem to determine reality from the dream - and right as the top wobbles, the screen cuts to black. If the top had fallen, it meant he made it out of the dream, and if it continued spinning, it meant he is still dreaming. Ten years on, and fans still argue about their theories about these last couple of seconds that have the potential to change the movie how we know it.

Now, the film's charismatically talented production designer, Guy Hendrix Days, has weighed in on the matter. Speaking to Forbes, Dyas remembered watching the rushes. "I think Chris and Wally Pfister shot a lot of the spinning top in that last scene and there were shots of the top looking extremely stable and there were shots of the top where it started to look like it was going to topple. It was sort of a big debate in the dailies about how the film was going to end," he revealed. Is Tenet a Sequel to Inception? Here's What John David Washington Has to Say!

"We all know the meaning behind the totems and what they stand for, so the idea was that it could become this wonderful tease for an audience," he added.

While many might hate the lack of clarity, Dyas finds it cool. "I think it’s just so great that we have a film, in recent years anyway, that doesn’t polish every single answer to every single question," he said. "If you go back in the history of cinema, particularly the ‘60s and ’70s, there are a lot of films that finish with ambiguous endings and they are wonderful and we debate them forever … There are so few films that have epic, meaningful endings that just leave people talking about them and I think Inception is fortunate enough to be one of those."

What are your theories about the end of Inception? Did Cobb make it out of the dream to reunite with his kids in reality? Or is he still dreaming in a limbo? Tell us.

(The above story first appeared on LatestLY on Jul 16, 2020 05:25 PM IST. For more news and updates on politics, world, sports, entertainment and lifestyle, log on to our website latestly.com).