The 2020 MTV Video Music Awards was hosted by Keke Palmer and the ceremony was opened with a special dedication to Black Panther hero Chadwick Boseman. 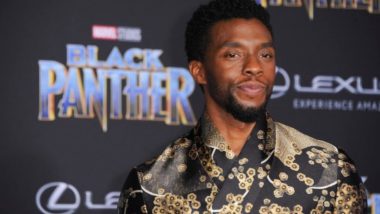 The 2020 MTV Music Awards, also known as the VMAs, took place on August 30 in New York City. The show was originally scheduled to be held at the Barclays Center, but it was given a miss owing to the ongoing global crisis. The artists took the stage in audience-free locations and was aired live online. The event was hosted by Keke Palmer and the ceremony was opened with a special dedication to Black Panther hero Chadwick Boseman who passed away on August 28 after a four year battle with colon cancer. His demise was a huge shock to industry members and fans around the world. The VMAs shared on its Twitter page, “RIP Chadwick Boseman. Tonight's #VMAs is dedicated to him.” MTV VMAs 2020: BTS Army Gear Up To Watch the K-Pop Band Perform 'Dynamite' For Their Debut Performance At Video Music Awards.

Host Keke Palmer in her opening monologue stated, “Before we get into the music tonight, we need to talk about the devastating loss of Chadwick Boseman, an actor whose talent and passion is a true inspiration to all the fans he touched and everyone he encountered.” The actress – singer – television personality further said, “We dedicated tonight’s show to a man whose spirit touched so many. He’s a true hero, not just onscreen, but in everything he did. His impact lives forever.”

The world needs more superheroes, and we all deserve to see ourselves in them. Chadwick Boseman helped make that happen. Rest in power. pic.twitter.com/d05kkkQR6b

Tonight's #VMAs is dedicated to him.

The Video Music Awards also showcased the late actor’s video in which Chadwick Boseman is seen accepting an MTV Movie Award in 2018, which was for his impeccable role in Black Panther. It also aired a black screen with the words “Rest in Power.”

(The above story first appeared on LatestLY on Aug 31, 2020 09:02 AM IST. For more news and updates on politics, world, sports, entertainment and lifestyle, log on to our website latestly.com).