A Quiet Place II has managed to usurp Godzilla Vs Kong from its position of raking in large sums of money in the COVID era. The Emily Blunt starrer made a whopping $48 mn in its opening weekend while the war of the titans collected Rs 32 million upon its debut. 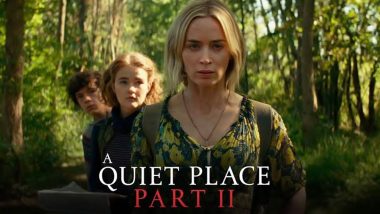 The much-hyped horror thriller A Quiet Place Part II seems to have breathed life back into the North American box office after the Hollywood film business was paralysed over most of the past months owing to the pandemic. The Emily Blunt-starrer has recorded a $48 million opening weekend from Friday to Sunday, marking the biggest three-day theatrical haul so far in the Covid era. The previous record-holder was Godzilla Vs Kong which $32 million last March, as per Box office Mojo. A Quiet Place II First Reactions: John Krasinski, Emily Blunt’s Horror Drama is ‘Tense As Hell’ Say Critics

The post-apocalyptic drama is a sequel to the 2018 global blockbuster A Quiet Place, and is directed by Blunt's actor-filmmaker husband, John Krasinski. According to variety.com, the film opened across 3,726 venues and, with Monday being Memorial Day, is expected to end up with a four-day collection of around $58 million.

The sequel has been produced at a budget of $61million, which is a substantial rise from the $17-million cost tag of the first film released only three years ago. A Quiet Place Part II was originally scheduled for a March opening last year and the decision of the producing studio, Paramount Pictures, to risk holding onto release for well over a year seems to have paid off.

(The above story first appeared on LatestLY on May 31, 2021 01:27 PM IST. For more news and updates on politics, world, sports, entertainment and lifestyle, log on to our website latestly.com).