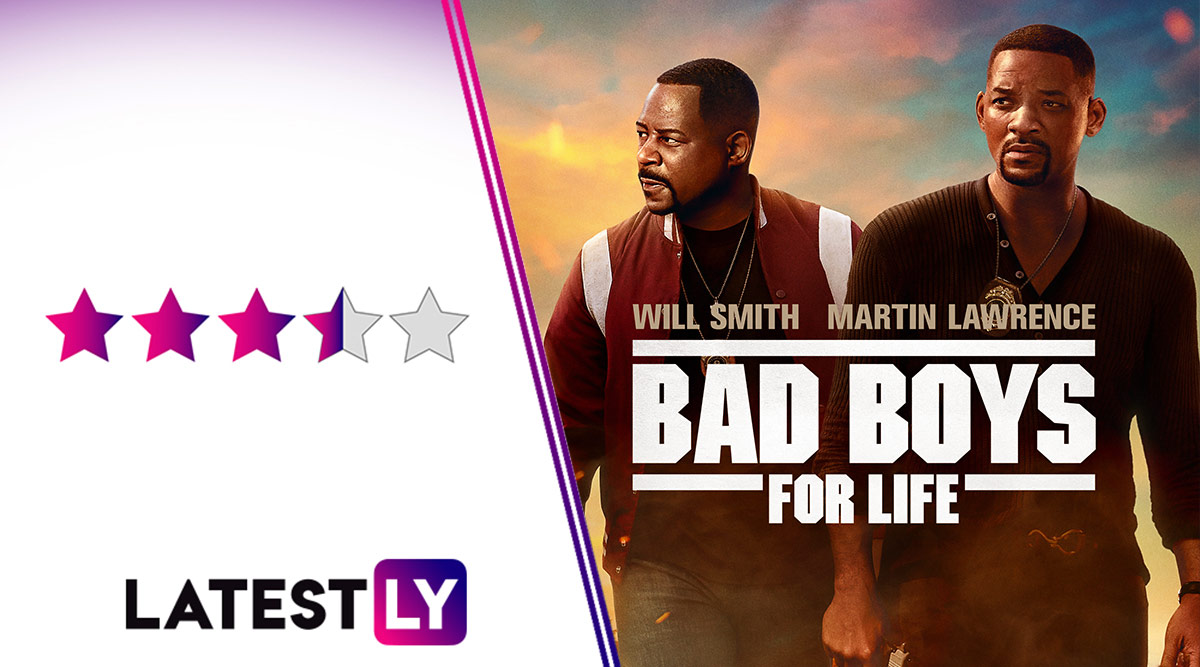 Bad Boys For Life Movie Review: The Bad Boys are back, and this time, Michael Bay is not around to let them do some very mindless explosions. Well, the director is involved in the film in an acting cameo, but the reins are handed over to the Belgian filmmaker duo Adil El Arbi and Bilall Fallah. The last time Michael Bay gave his franchise to another director, the result was the best movie in the Transformers franchise - Bumblebee. Something of that sort also happens with Bad Boys franchise. Bad Boys For Life, the third film in the franchise, may feel a letdown when you think about the exhilarating action scenes that Bay brings in his movies, but this is easily the best movie in the series. Rohit Shetty Gets Simmba, Singham And Sooryavanshi To Give A Shout-out To Will Smith And Martin Lawrence's Bad Boys For Life (Watch Video).

Miami Detectives Mike (Will Smith) and Marcus (Martin Lawrence) continue to cruise around as the bad boys that they are, but things are changing. For one, age is catching up with them. After the birth of his grandson, Marcus is contemplating retirement, while Mike still thinks he can't be tied down, despite having feelings for his ex-lover and fellow colleague Rita (Paola Núñez) who is heading her own hi-tech unit, AMMO.

Meanwhile, the crime syndicate in the city is taken over by a Mexican cartel led a young mob boss and assassin, Armando (Jacob Scipio). Armando is instructed by his mother Isabel Aretas (Kate del Castillo) to take down several police personnel, including Mike, who were involved in the killing of his father. When the casualties rise, Mike and Marcus aim to take down this new threat together for what they think could be their last ride down the Miami sunset.

Bad Boys For Life, of course, rides on our nostalgic love for what is a pretty okayish franchise, that doesn't exactly stand the test of time. Nostalgia makes us remember fondly the best parts about any old movie, no matter how bad they are. Thankfully, Adil El Arbi and Bilall Fallah understand what works in the present setting and tailor the film accordingly to make a very enjoyable buddy cop movie.

The premise may feel very derivative, as the movie veers less towards being Bad Boys and becomes more Lethal Weapon, especially the way how it positions Mike and Marcus' camaraderie. Mike being the one who always wants to be in reckless action, and Marcus wanting to stay out of it altogether. The dramatic reveal involving Mike's past, that also leads to a kinda weak finale, also has a similarity to a Will Smith movie from the last decade, the name of which can't be taken here for SPOILER reasons. Bad Boys for Life Trailer: Will Smith & Martin Lawrence Are Back Together for One Last Ride (Watch Video).

Happily enough, the lack of originality is more than compensated with the kind of fun vibe the makers have added in the film, while also not being averse to taking a couple of dark, risky turns. Relying on the superb chemistry between the leads, Bad Boys For Life injects enough energy in nearly every scene, that you really don't feel like the movie is another needless rejuvenation of a franchise that's already seen the twilight (which it is).

Watch The Trailer of Bad Boys For Life:

The humour may not work always, especially a couple of times the movie goes meta in creating nostalgic value. The geriatric jokes also become tired after a point. But then, Bad Boys For Life also lets its characters face their own mortality and question themselves if they still want to be in the game. Or if they have involved themselves in wanton violence. Now, who expected the Bad Boys to go self-introspective?

Will Smith and Martin Lawrence are both in top form, with Will's swagger being as cool as ever (even though the movie may want to downplay it), reminding us why he used to rule the screens in the '90s and the '2000s. Martin may come across as a more comical sidekick in the threequel, no complaints there, but he is also very effective in the two dramatic sequences in the first act.

What I even liked about the movie is that Bad Boys For Life doesn't make the younger blood in the team (Vanessa Hudgens, Alexander Ludwig, Charles Melton) feel like sore thumbs, and make them be an intrinsic part of the plot. Sure, most of the times their presence serves the purpose of making our heroes realise how so out of time they are now, but when the old and the young work together, you really don't whine about the unnecessary parts added in. Joe Pantoliano has some of the funniest lines and steals the show whenever he is on screen.

Robrecht Heyvaert's cinematography is gorgeous giving some very splendid skyline shots of Miami. The action scenes are surprisingly less effective, though the humour infused in these scenes does save the day.

- Will Smith and Martin Lawrence

- Some of the Humour Beats Feel Forced

Bad Boys For Life is highly entertaining, very funny and often arresting, with Will Smith and Martin Lawrence in great form. Indubitably, the best film in the franchise that could perhaps lead Bad Boys series to take the Fast & Furious route in the future.