Black Panther actor Michael B. Jordan has been named as 2020's 'Sexiest Man Alive' by Peoples Magazine. This makes him the third African-American actor to have topped the list in a row after singer John Legend in 2019 and Idris Elba in 2018. 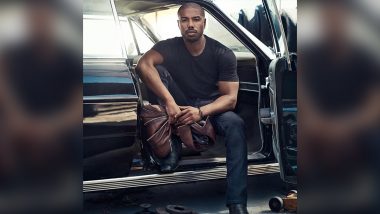 We may not have liked him much as the baddie Erik Killmonger in Black Panther (purely because he was the bad guy), but Michael B. Jordan is one loved man. So much so that he has made it to the top of People Magazine's 'Sexiest Man Alive' list. This makes him the third African-American actor to have topped the list in a row after singer John Legend made it to the list in 2019 and Idris Elba clenched the spot in 2018. Michael B Jordan Urges Hollywood Studios to 'Use Their Power to Demand Diversity' At Black Lives Matter Protest in LA (Watch Videos).

Talking to People about his win, Micheal revealed, "When my grandmother was alive, it was something that she collected, and then my mom naturally reads it a lot and my aunts as well. This is one that they’re definitely going to have a special place for." He continued, "I think there’s a time and a place for everything. I’ve been picking my moments to make the most impact. We can all take action—big or small—to help create the change we want to see." Chadwick Boseman Death: Black Panther Costar Michael B Jordan Pays an Emotional Tribute, Says 'I Wish We Had More Time'.

Micheal debuted on the acting scene after modelling for Toys "R" Us, before landing a pivotal role in 2003 in All My Children. In facct, he replaced Chdwick Boseman, his future Black Panther co-star in the show. After creating a name for himself on TV, his big screen breakthrough came in the form of Fruitvae Station and his performance earned him critical acclaim. He went on to do the Fantastic Four, played Adonis "Donnie" Creed in Rocky sequel Creed and in 2018, bagged Black Panther. And ever since, there has been no turning back for him. Congratulations Micheal B. Jordan.

(The above story first appeared on LatestLY on Nov 18, 2020 12:57 PM IST. For more news and updates on politics, world, sports, entertainment and lifestyle, log on to our website latestly.com).