Brie Larson, the Oscar-winning actress who celebrates her 30th birthday on October 1, became the first actress to headline a movie in Marvel Cinematic Universe. As all Marvel fans might be aware now, she is Carol Danvers aka Captain Marvel in the MCU. 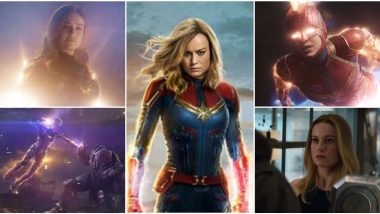 Brie Larson, the Oscar-winning actress who celebrates her 30th birthday on October 1, became the first actress to headline a movie in Marvel Cinematic Universe. As all Marvel fans might be aware now, she is Carol Danvers aka Captain Marvel in the MCU. Teased first in the end-credit sequence of Avengers: Infinity War, Captain Marvel made her debut in the solo film that came out in 2019, a couple of months before she once again made an appearance in Avengers: Endgame. Brie Larson Birthday: 10 Glamorous Pics Of The Powerful Captain Marvel Star You Would Not Want To Miss!

Captain Marvel the movie, was mostly set in the '90s, and was an origin story for the superhero, who was born an Earth-ner, but was trained by Kree, after being exposed to radiation from the Tesseract. Her immense powers, which include flight and super-strength, make her perhaps the most powerful Avenger in MCU, even beating Thor and The Hulk. She can travel galaxies without the need of a spaceship, protecting planets that don't have a guardian, which explains her absence during the previous movies.

Captain Marvel, directed by Anna Boden and Ryan Fleck, turned out to be a big hit, with Larson receiving praise for her performance. Though she didn't have much screentime in Endgame, she had a few memorable scenes there. Captain Marvel Movie Review: Brie Larson's Superhero Outing is Impressive and the Future of MCU Seems to be in Good Hands.

On the occasion of the actress' birthday, here's looking at the 7 Most badass moments of Captain Marvel in MCU.

It is only towards the third act that Carol Danvers, who is battling amnesia, gets to unlock her full powers through this powerful scene that parallels women empowerment.

To understand how powerful she is, look at the scene where Captain Marvel destroys Ronan the Accuser's fleet single-handedly, earning her enemy's awe in the process. Brie Larson Birthday Special: 7 Memorable Movies You Nearly Forgot the Avengers EndGame Actress Starred In Before Her Oscar-Winning Turn and Her Marvel Innings.

Blasting Off Her Former Mentor

Yon-Rogg (Jude Law) had been Carol's former Kree mentor. but he turns out to be one of the antagonists, trying to manipulate her to use her powers to destroy their enemies. So it was fun to see her blast off her former mentor, right in the middle of his taunting speech!

Captain Marvel's first big moment in Avengers: Endgame came early on when she saves Tony Stark (Robert Downey Jr) from a near death, when the latter was stranded in space with oxygen, water and food running out. Though we have to ask how did she travel so fast to Earth without him dying of lack of oxygen... Avengers EndGame Movie Review: Marvel’s Superhero Film Is an Emotionally Wrenching, Enriching FanBoy Experience That Goes for Your Heart!

Captain Marvel proves how badass she is when she declares to the Avengers that she is going to kill Thanos single-handedly, leaving others shocked. As if that wasn't enough, watch her stand up to Thor, as he recalls Storm-Breaker, without her blinking an eye, earning his respect, as he says "I like this one!" Her response - just a thin smile!

Her Badass Re-Entry in the Battle

Even with all the Avengers and the allies re-entering the final battle with Thanos and destroying his forces, the Mad Titan gained an upper-hand when he allows his spaceship to rain fire on the armies. Just when things looked down, something enters the atmosphere - is it a bird? Is it a plane? No, it is Captain Marvel, who destroys Thanos' ship single-handedly, as she did with Ronan's, leaving the purple alien utterly shell-shocked.

Showing Thanos Who is the Boss!

Thanos, who easily beat the Hulk in a one-on-one match in Infinity War, found himself on the receiving end when he faced Captain Marvel in a similar fight. He was shocked to see her being as stubborn as a rock when he head-butted her. It took him to use an Infinity stone to her out of the way.

Brie Larson will be returning for the sequel to Captain Marvel, which is to be directed by Nia DaCosta. Captain Marvel 2 is scheduled to release on July 8, 2022.

(The above story first appeared on LatestLY on Oct 01, 2020 06:20 PM IST. For more news and updates on politics, world, sports, entertainment and lifestyle, log on to our website latestly.com).