Capone Movie Review: Tom Hardy is Brilliant, His Gangster Drama Not So Much, Say Critics

Tom Hardy stars as gangster Al Capone in his biopic written by Josh Trank and while the actor's fans had some great hopes pinned on his outing, critics are hella disappointed with its final outcome. 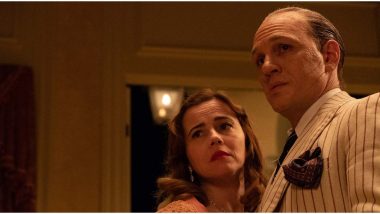 Tom Hardy's next big release (or at least we touted it to be) Capone was scheduled for a theatrical release. But fortunately or unfortunately, the film was released on VOD (Video on demand) courtesy the ongoing coronavirus pandemic. While the premise of this biopic sounded intriguing and Hardy was determined to sink his teeth into it, the final outcome is well, underwhelming. There's always a risk you take when you decide to sign a biopic. Especially the one that revolves around a controversial figure. In this case, the actor was terrific in his portrayal but the plot not so much. Capone Trailer: Tom Hardy Transforms Into the Ageing, Infamous Gangster in Josh Trank’s Directorial (Watch Video).

Critics in the west are busy slamming Capone's biopic left, right and centre while occasionally hailing Hardy for all his efforts. Based on all the reviews that we read, we'd describe the biopic as a  tight plot with a loose execution. Don't believe us? Well then have a quick look at what critics are saying below.

The New York Times: Prosthetics have helped transform the performer into a repository of ashen skin, eyes with broken blood vessels and a guttural quack better-suited to the Penguin. If you hit the character with a baseball bat, he might explode, like a piñata of phlegm and other excretions.

Los Angeles Times: You don’t hire Hardy if you don’t want an actor who will embrace the physical realities of the role with an almost terrifying commitment. Hardy doesn’t “play” Capone, he sweats, grunts and vomits Capone, while caked in old-age makeup, bloodshot eyes darting, mumbling menacingly in Italian.

Time: Capone is an odd little film, at times weirdly engaging but often so bizarrely muddled that you might identify a little too closely with its perpetually unglued protagonist. But Hardy is always worth watching. Thanks to prosthetics, his face has the same doughy contours we see in pictures of the real Capone, but his eyes, at once dead and ruthless, do most of the work.

Deadline: Hardy’s heavily made up, scarred face looks just like that — a makeup job — and whether due to a stroke or whatever speaks in an incomprehensible language that only gets easy to understand when he occasionally lunges into Italian and subtitles are provided.

New York Post: Tom Hardy really dodged a bullet with this one. The actor’s new biopic “Capone” skipped its theatrical release due to the coronavirus pandemic and, as a result, few people seem to know it exists. Lucky for Hardy, because he makes the worst Al Capone ever.

Tom Hardy is now gearing to star in the sequel of Venom that hit the screens next year. While his first outing didn't fetch any good reviews, its box office success prompted makers to go ahead with its sequel.

(The above story first appeared on LatestLY on May 14, 2020 04:21 PM IST. For more news and updates on politics, world, sports, entertainment and lifestyle, log on to our website latestly.com).