Kim Kardashian and Pete Davidson posted a video on social media that sparked a lot of conversation on the internet. The video showed them both in all black matching outfits and platinum blonde hair, kissing and laughing with each other. 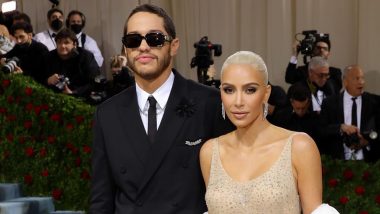 American media personality Kim Kardashian and Pete Davidson are not holding back the Public Display of Affection (PDA) as evident from the former's recent social media post. Kim Kardashian 'Was Not Starving Herself,' Personal Trainer Defends Her Rapid Weight Loss.

According to Fox News, Kardashian took to her Instagram handle and posted stories featuring a series of videos with her Saturday Night Live alum boyfriend. Davidson debuted his new bleached-blonde hairstyle to match his girlfriend's latest hair transformation.

Lately, Davidson and Kardashian have been putting their relationship on display. In April, they made their red carpet debut at the White House Correspondent's Dinner. Davidson then also supported his girlfriend at Hulu's premiere of The Kardashians this month, as per Fox News.