Eternals: Ma Dong-seok Opens Up About His Character Gilgamesh in the Superhero Movie, Says ‘It Reflects My Signature Action Style’ 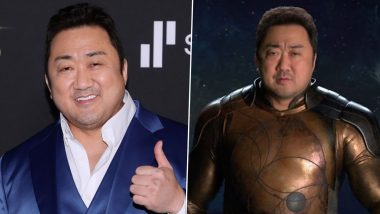 South Korean actor Ma Dong-seok, also known as Don Lee, has said his character Gilgamesh in the upcoming superhero movie 'Eternals' reflects his unique personality and signature action style. "Since the zombie thriller 'Train to Busan' (2016) was released about five years ago, I've received some offers from Hollywood," he said during an online press conference with Korean media on Friday. "A few years ago, I got a call from a casting director of 'Eternals' after I lost some projects due to my schedules." Eternals Star Kumail Nanjiani Schools Twitter User Who Tried To Troll Him Over His Physical Makeover for Marvel Film.

Ma is the first ethnically Korean actor to take a lead role in a Marvel superhero film, reports Yonhap news agency. South Korean Soo-hyun, known as Claudia Kim, played a supporting role as a geneticist in 'Avengers: Age of Ultron' (2015). Gaining international popularity for his role in 'Train to Busan', Ma has done about 50 films, including the crime actioner 'The Outlaws' (2017) and the crime thriller 'The Gangster, The Cop, The Devil' (2019), across 15 years. Eternals Release Date: Marvel Film Confirmed to Clash With Akshay Kumar’s Sooryavanshi on Diwali 2021.

Over his career, the 50-year-old star has carved out a presence in the South Korean movie industry as a lovable action character who is powerful and tough but friendly and warm-hearted. Ma said 'Eternals' director Chloe Zhao, who won Oscars for 'Nomadland' (2021), had asked him to take Gilgamesh and changed the character, who is not Asian in the original Marvel Comics, for him.

"She changed Gilgamesh, a mythical hero, to an Asian character and tailored it to me," Ma said. "She wanted me to show my own style of action, like a big punch or a box. She created a character that fits me perfectly." Ma said he felt almost nothing different in shooting a film in the United States. But I was surprised by the huge scale of its production and its workforce," Ma said. "Hundreds of people are working on one project. Their teamwork and collaboration looked great to me." He said he and his American colleagues, including Angelina Jolie as Thena, did well to show on-screen chemistry in 'Eternals'.

(The above story first appeared on LatestLY on Oct 23, 2021 06:04 PM IST. For more news and updates on politics, world, sports, entertainment and lifestyle, log on to our website latestly.com).