From Ted Bundy Tapes to You, Netflix Shows Make Viewers Lust after Monsters

Netflix's latest shows have been all about the anti-heroes who are too hazardous to lust over! 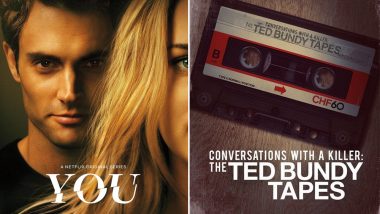 Netflix's new shows You and Conversations With A Killer. Photo Credit: Twitter

Netflix has been dropping some scare bombs on its viewers, particularly women,  with their recent releases.  Two of their new series focussing on vile men and their charming ways have become the point of discussion.  Yes, we are talking about one-season old Penn Badgley starrer You and the upcoming film on Ted Bundy starring Zac Efron for which the streaming giant has paid more than an arm and a leg. In fact, even the recently released mini-docu series Conversations With A Killer: The Ted Bundy Tapes helmed by Joe Berlinger became a topic of discussion for the reactions it generated.

While the OTT platform has in the past been extremely careful and made sure to prompt trigger warning messages prior to shows dealing with sensitive content, there never seemed to be concern about the viewers getting misled with a piece of content.  For the first time, Netflix had to step in and ask its viewers to stay away from idolising false figures. Netflix's Conversations With A Killer: The Ted Bundy Tapes - Here's All You Must Know About The Most Feared Serial Killer

For the uninitiated, problems arose post the release of the horrifying Ted Bundy Tapes when several viewers took to social media discussing Bundy's sex appeal as opposed to his condemnable acts.  The docu-series traces the story of the American serial killer, kidnapper and rapist who was imprisoned on account of at least 30 homicides.

Here's the trailer of You from Netflix:

A similar issue was observed with You which deals with a fictional plot dealing with a lead character who is identified as a stalker preying on women under the pretext of finding love.  Penn's character as Joe at first comes across as a silent brooder, good-looking bookkeeper until we see his creepy stalker side. Ideally, such a character may induce sympathy from a viewer's end if mental health is taken into consideration but lusting over it could worsen a problem that needs to be addressed head-on. Under no circumstances, stalking can be passed off as love and that, unfortunately, did not come across as a strong message from the latest series. Netflix Series 'YOU' Fame Penn Badgley is Totally Against Romanticizing Stalking But Bollywood Filmmakers Are Cool With It!

Since times immemorial, cinema has hailed flawed characters and we even associate the adjective 'delicious' with villains.  A look at the trailer of Extremely Wicked, Shockingly Evil & Vile (the aforementioned Zac Efron film)  will make you counter question the makers as to why the need to glorify Bundy's character and that isn't it an equally irresponsible move. But then again, isn't everything upto viewer discretion!

Given that audiences are lapping up content that is addictive, the potential hazards that it may cause needs to be weighed in by the makers and distributors. The debate about separating the actor from the artist does crop up in case of Efron but roping in a Disney boy to play one of the most dreaded American serial killing rapist and promoting him as a sultry being as opposed to focussing on the victim stories seems a rather irresponsible move.

All in all, it seems Netflix wants to rock two boats at once whilst maintaining their viewership records at the same time trying to play a responsible medium.

(The above story first appeared on LatestLY on Feb 08, 2019 01:02 PM IST. For more news and updates on politics, world, sports, entertainment and lifestyle, log on to our website latestly.com).