Golden Globe 2021 was a mix of zoom call fails, weird backdrops, strange wardrobe and some really amusing acceptance sppeches. We have pulled out nine such moments from the event which we found quite interesting. Yes, we did include the mute-unmute saga! 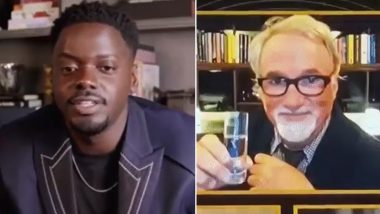 Golden Globes 2021 just wrapped up after a host of historic and memorable wins. There were many important moments like Chloe Zhao becoming the only second woman to win the Best Director award for Nomadland after Barabara Streisand, Chadwick Boseman winning the Best Actor trophy posthumously and much more. But what's a Hollywood award ceremony without its many moments which evoke equal amounts of 'Haww', 'Ouch' and 'Wow' . Golden Globes 2021 wasn't devoid of those special features either and some of them might even resonate with you. We have compiled some awkward, some funny and some wild moments from the night just for you. Golden Globes 2021 Winners List: Netflix’s The Crown Wins Big, David Fincher’s Mank Snubbed and More from the 78th Golden Globe Awards

Daniel Kaluuya was the first winner of the night when he was named the Best Support Actor for Judas and the Black Messiah. His acceptance speech went silent because, as Variety suggests, his mike was on mute. Some Zoom issues are universal, pandemic has proved it.

Daniel Kaluuya forgetting to unmute his zoom after winning the Golden Globe for best actor is relatable at pic.twitter.com/RMN3lXf2ww

When people were not getting distracted by Jeff Daniels' flannel shirt attire to Golden Globes, they were very amused by the several doors in his bedroom, or wait, is that a closet or basement? People are still trying to figure that out. Daniels was one of the nominees in the Best Actor in a Television Motion Picture

David Fincher drinks to his loss

David Fincher was one of the nominees in the Best Motion Picture Director category. The trophy went to Chloe Zhao and Fincher took a swig of whatever he was drinking on zoom.

David Fincher when he did not win Best Director.#GoldenGlobes pic.twitter.com/tivu0LGXg3

Sandra Oh and the Dinosaur

Sandra Oh introduced Palm Springs with some shimmy dancing and a dinosaur in the background. And of course, the snow!

Everyone took turns to slam Hollywood Foreign Press Association, which organizes Golden Globes, for having no black members in the forum. Tina Fey and Amy Poehler roast HFPA in their opening set, thus setting the tone just right. Later Sarah Baron Cohen too took a dig at the 'all-white HFPA' during his acceptance speech after Borat won the Best Motion Picture, Comedy or Musical.

This is one speech that made everyone teary-eyed much like Taylor Simone Ledward, the widow of Chadwick Boseman who accepted his award. The actor left us bereaved last year.

Taylor Simone Ledward accepts the award for Best Actor in a Motion Picture, Drama on behalf of her late husband @chadwickboseman at the #GoldenGlobes.pic.twitter.com/UOgdLlnA52

Rosamund Pike won Best Actress in a Motion Picture, Musical or Comedy for I care A Lot and was so overwhelmed by the win that she thanked someone unusual. Check here...

Catherine O'Hara and the musical husband

People are still unsure as to why Catherine O'Hara's husband was playing that annoying music while she was giving her acceptance after receiving the Best Supporting Actress Award in a Television series Music Or Comedy for Schitt's Creek.

Wrap it up like Don Cheadle, Jason Sudeikis will get this joke

Jason Sudeikis won Best Actor in a TV Series, Musical or Comedy and while thanking everyone for the award, he kinda sort of went on and on. That prompted Cheadle to gesture 'wrap up'.

.@jasonsudeikis wins for Best Actor in a TV Series, Musical or Comedy at the #GoldenGlobes! pic.twitter.com/kJyyfRcH6g

We are pretty sure there must be more which scored for you. Do let us know which were your favourite bits from last night's gala Golden Globes show

(The above story first appeared on LatestLY on Mar 01, 2021 02:33 PM IST. For more news and updates on politics, world, sports, entertainment and lifestyle, log on to our website latestly.com).