Grammy Awards 2019: Will Backstreet Boys Win Their First? Here Are 7 Times The Band Was Nominated Before 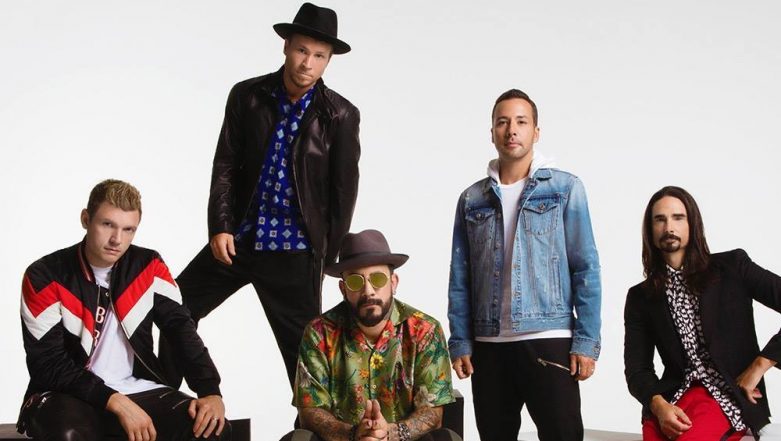 Backstreet Boys have successfully gone from being a 90s fame boy band to resurfacing in the pop genre once again almost eighteen years after their last album. With their latest nomination at the 61st Annual Grammy Awards, the band is over the moon for the love they have been receiving. This is the band's eighth Grammy nomination. The song "Don't Go Breaking My Heart" has been nominated in the Pop/Duo group performance category. BAFTA Awards 2019 Live Streaming Online: Get Live Telecast Time, Full Nominations List of British Academy Film and Television Arts Awards

The boys are not just back but they are hitting it out of the park with their new music as their latest album DNA reached no 1 on Billboard Artist chart. Naturally, the band is super excited about this and their fans are now praying for a big Grammy win. Let's take a look at all the Backstreet Boys nominations at the Grammys over the years. Grammy Awards 2019 Nominations: Check Out Complete List of Nominees for the 61st Annual Ceremony.

Backstreet Boys have been nominated for the 2019 awards for this song:

Back in 1997, Backstreet Boys released a self-titled album consisting of songs such as 'Quit Playing Games', 'Get Down', 'Anywhere For You'. Their instant popularity won them a nomination at the 41st Grammy Awards. The band lost this award to singer-songwriter Lauryn Hill who took home five Grammys that year.

2. At The 42nd Grammy Awards, The Band Had Four Major Nominations

Millenium was one of the most loved Backstreet Boys album ever. Songs such as 'I Want It That Way' became a sensation and that year, the band found itself getting as many as four nominations. Millenium was nominated in two categories, 'Album of The Year' and 'Best Pop Album'. The song "I Want It That Way" was nominated for 'Record Of The Year'and 'Best Performance by a Duo or Group Vocal'.

3. Backstreet Boys Were Back in 2000 With Yet Another Nomination

Backstreet Boys were consecutively nominated in the same category for the third time. The pop band churned out a hit single in 2000. 'Show Me The Meaning' peaked at the Billboard and even reached the no 1 position that year. They were nominated for the same song at the 43rd Grammy Awards.

4. 18 Years Ago "Shape Of My Heart" Was Another Missed Opportunity for the band

Before their comeback in 2018, the band was last nominated at the prestigious music awards was back in 2001. Their song "Shape of My Heart" was nominated in the same category as "Don't Go Breaking My Heart" stands today.

Over the years, the band has lost to some of the biggest musical geniuses such as U2, Carlos Santana etc. Forward to 2019 and the band is competing with the likes of Maroon 5, Lady Gaga and Justin Timberlake.

Will this year be lucky for the band to bag their first ever Grammy? We'll find out tomorrow at the 61st Annual Grammy Awards.