Audiences while watching their favorite television shows can get a huge thrill out of seeing some of their favorite stars cameo in them. Cameos in general help a particular show or movie get popular as the star power is able to keep them trending. 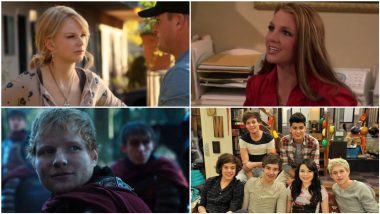 Audiences while watching their favorite television shows can get a huge thrill out of seeing some of their favorite stars cameo in them. Cameos in general help a particular show or movie get popular as the star power is able to keep them trending. It is also a great way to heighten the thrills or wow factor of a scene as there is nothing more surprising than seeing your favorite celebrity appear in your favorite show. Britney Spears’ Lawyer Resigns From Singer’s Conservatorship Case.

Television shows in general are very notorious for having huge stars cameo in their shows. Considering how the worthiness of a television show is based on how many people tune in every week to watch it, cameos are a great way to drive up that viewership. So today we are taking a look at ten such pop stars who have cameoed in some of your favorite shows. Ed Sheeran Confirms Teaming Up With BTS Once Again and Netizens Are ‘Happier’ Than Ever!

Britney Spears (How I Met Your Mother)

The Pop Queen of the early ‘2000s appeared in this hit sitcom. She appeared in the episode “Ten Sessions” and played the role of a receptionist of a dermatology clinic by the name of Abby. She meets Ted at the clinic who goes over there to have his tattoo removed. It was a real treat for her fans as Britney was quite hilarious and fun to watch in the episode.

The British boy band at the height of their careers appeared on the hit Nickelodeon show iCarly. They played themselves and had some hilarious exchanges throughout the episode. They capped it off by performing their song “What Makes You Beautiful”.

The Canadian pop singer appeared in the hit crime drama show at the height of his music career. He plays the role of a bomber by the name of Jason McCann. His character is fueled with revenge as he wants to take down CSI agents after they killed his brother in a previous episode.

Demi Lovato (Will and Grace)

Demi Lovato returned to the small screen after a long time. Her career started as a Disney actress and it was a treat to see her return to the medium that kickstarted her popularity. She appeared in season three of Will and Grace as she played a potential surrogate for Will.

The boy band appeared in the episode “The Band Episode”. Their role is that of a group of teens who play basketball. They drink Sabrina’s talent potion which leads into a performance of  “As Long As You Love Me” by them.

Ed Sheeran is a known fan of the hit HBO fantasy show Game of Thrones. Every opportunity he has gotten to talk about it, he just geeks out over how Game of Thrones is his favorite show. So it was a real surprise to see him pop up in the premiere of Season seven as a Lannister soldier. The great part about this is that Maisie Williams was a huge fan of his, and his appearance was set up as a surprise for her.

The pop star appeared in season 9 of the crime drama show. She played the role of teenager Haley Jones, who is found dead at a motel after a string of murders. Let's also not forget Swift's sweet surprise cameo in New Girl. When Vidya Balan’s The Dirty Picture Song Became a Memorable Moment in the Popular American Sitcom New Girl (Watch Video).

The Prince of pop (pun intended), made a surprising cameo in New Girl. He was a huge fan of the show and personally reached out to FOX so that he could make an appearance in it. Prince throws a huge party in the episode to which Jess and Cece are invited. He was instrumental in Nick and Jess professing their love for each other.

Mars made a surprise cameo in the season two finale of this CW show. He performs the song “Rest of My Life” at Jane and Michael’s wedding.

The famed rapper appears in the episode titled after his hit song “Lose Yourself”. His role in the episode is that of punching Vincent in the face and sending him to the hospital with a bruised and bloody face.

(The above story first appeared on LatestLY on Jul 08, 2021 08:55 PM IST. For more news and updates on politics, world, sports, entertainment and lifestyle, log on to our website latestly.com).