Megan Thee Stallion took home the award in the Best News Artist category at Grammys 2021. The 63rd Annual Grammy Awards were delayed owing to the ongoing COVID-19 pandemic. The annual show shifted from its original January 31 broadcast to March 14. 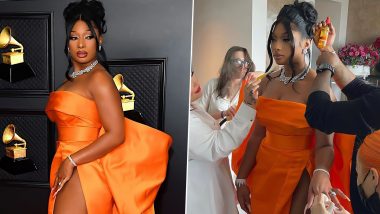 "First of all, I want to say everybody is amazing. Every artist that was nominated for this award is so amazing, so shoutout to all of y'all," she began.Megan continued, "Secondly, I really just want to thank god because thank you for putting life into my body for me to be able to even be here today. I want to say thank you for always being with me, being by my side." "You know, it's been a hell of a year but we made it," Megan shared, before honouring her mother, who recently passed away. BTS at Grammys 2021 MusiCares Concert: K-Pop Boy Band 'Lights It Up Like Dynamite' With Grammy-Nominated Song, Watch Video.

The artist shared, "I really want to say thank you to my mama, she's not here with me today but I know she is here with me in spirit and she always believe I could do it, so thank you all so much." Megan is up for four awards tonight, including Best Rap Performance for 'Savage', which she and Beyonce already won. All that remains is Best Rap Song and Record of the Year.

Though usually held at the Staples Center, this year's festivities will take place at the Los Angeles Convention Center. Keeping in mind the pandemic, the event is said to be cut down to size and will have mainly a home viewing audience. The artists will be seen performing as The Recording Academy announced its list of performers. However, they will be seen performing at multiple stages as opposed to one stage at a designated spot.