On a recent episode of her Goop podcast, Gwyneth was asked about her worst kiss and the actress named her romantic scenes with Robert Downey Jr. 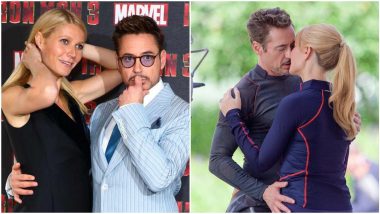 Tony Stark and Pepper Potts - a couple like no one else, right? Gwyneth Paltrow and Robert Downey Jr's chemistry in Marvel Cinematic Universe was hugely appreciated and they had a rather emotional but beautiful end to their onscreen relationship. And while you are admiring their rapport and secretly praising the chemistry they shared, we inform you about why she thinks her kissing scene with RDJ is the worst one ever! Gwyneth made this startling revelation in her conversation with Kate Hudson and honestly, we were a tad surprised. Shah Rukh Khan Flirts with Gwyneth Paltrow in This Video and Honestly, We Don’t Even Care about Tony Stark Anymore!

On a recent episode of her Goop podcast when Gwyneth asked Kate to name her best kiss, the actress had a list of worst ones instead. When Paltrow was quizzed about the same, she said, “With Robert, like, when I kissed him, I was like, ‘You’ve got to be kidding me, this is literally like kissing my brother.’” For the ones who think if RDJ would be surprised to hear her recent comments, well, turns out he was already aware of it. Gwyneth Paltrow Aka Pepper Potts Gets An Uber Cool 'Happy Birthday' Wish From Robert Downey Jr - View Tweet.

In 2010, Robert in his conversation with People magazine said that Gwyneth indeed did not like how he kissed. “She said... I didn’t know what I was doing, like, ‘It didn’t feel good.’ And I said, ‘You know what? First of all, we’re all friends, so what would be creepy is if I was coming off all sexy to you while we were shooting – which by the way, I’ve done that in movies and it creeps them out! So why would I creep you out?’,” he said.

And here we were going gaga over their romantic scenes! Sigh!

(The above story first appeared on LatestLY on Oct 14, 2020 11:05 PM IST. For more news and updates on politics, world, sports, entertainment and lifestyle, log on to our website latestly.com).