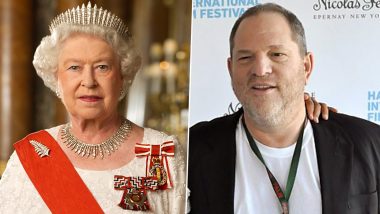 Disgraced Hollywood producer Harvey Weinstein recently suffered another blow when he was stripped off of his U.K. Honor of the Most Excellent Order of the British Empire honour, or CBE, that was bestowed upon him in 2004. Queen Elizabeth II stripped the honour off of Weinstein, who in March, was found guilty of rape and sexual assault charges and sentenced to 23 years in prison. As per reports in BBC, the decision to annul his honorary title was made at a recent meeting of the Honours Forfeiture Committee. Harvey Weinstein Gets Jailed For 23 Years In Rape and Sexual Assault Case, Netizens Hail #MeToo Movement.

A statement in The London Gazette read, "The Queen has directed that the appointment of Harvey Weinstein to be an Honorary Commander of the Civil Division of the Most Excellent Order of the British Empire, dated 29 January 2004, shall be cancelled and annulled and that his name shall be erased from the Register of the said Order.” Coronavirus: Harvey Weinstein Tests Positive for Covid-19, Netizens Call it Karma (View Tweets).

Harvey Weinstein is not the first personality to be stripped off of the honour. Entertainer Rolf Harris lost his CBE in 2015 after he was found guilty of 12 indecent assaults and banker Fred Goodwin of the Royal Bank of Scotland, was also stripped of his knighthood because of his role in the fall of the bank.

(The above story first appeared on LatestLY on Sep 18, 2020 07:26 PM IST. For more news and updates on politics, world, sports, entertainment and lifestyle, log on to our website latestly.com).