Chiu wanted to add in her NDA that "Harvey must go to sex therapy, so he has to admit that he has an addiction to sex." 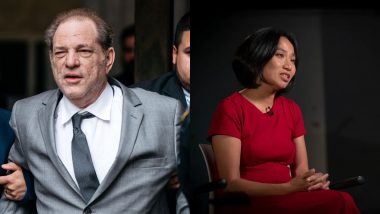 Disgraced Hollywood mogul Harvey Weinstein has been sentenced to 23 years in prison after he was found guilty in multiple charges of sexual harassment. It was a win for the #MeToo movement. Weinstein's former colleague, Rowena Chiu, who was an assistant at Miramax, was the 81st victim of harassment to come forward. She claimed that Weinstein tried to rape her in 1998. She opened up to a friend who complained to the high-ups. But both the women were silenced with one of the most complicated and strict non-disclosure agreement (NDA). Harvey Weinstein Recovers From Coronavirus, Disgraced Hollywood Producer Out of Quarantine After Showing No Symptoms.

To give you an idea of how strict the NDA was, Chiu says that she was not even allowed to disclose her salary at Miramax to the government or tax authority in the UK. She was to direct anyone who required that information from her to a lawyer in the London office of Weinstein. She was disallowed from sharing information, talking about her harassment or time at Miramax with her family and friends. Imagine living with that for decades.

Chiu broke her NDA for the first time when she recounted the horrors on Today show. She has given multiple interviews over time and in her new interview with Variety, she talks about reforms on NDA laws in the UK. Netflix Series Hollywood Creator Ryan Murphy Calls Henry Wilson 'the Gay Harvey Weinstein'.

Talking about the NDA, she said, "It’s like the mafia. This agreement had to not exist. This payment had to not exist. If the tax authorities contacted us, we had to send them back to Harvey’s lawyers in London. We couldn’t even admit to its existence if Her Majesty’s Government sent officials to ask us about it."

"We had the fear of God put into us. We were told by our own lawyer — not even just Harvey’s lawyers — that we must treat this time as a black hole. It said very specifically in our contract that we can only refer in very general terms to having worked for Harvey, and we can never talk in any detail about any aspect of our life during this time ever to anybody — not just the media and lawyers and doctors and therapists, but there was also a clause about friends and family," she explained. Chiu and her helpful friend were locked out of any emotional support.

Chiu wanted to add in her NDA that "Harvey must go to sex therapy, so he has to admit that he has an addiction to sex."

"We fought really hard to have a really simple clause that said Harvey must travel with one male assistant at any time," she added.

She still fears about breaking the NDA, but feels that with 111 women speaking against him, he has far worse things to deal with.

(The above story first appeared on LatestLY on May 22, 2020 11:11 AM IST. For more news and updates on politics, world, sports, entertainment and lifestyle, log on to our website latestly.com).