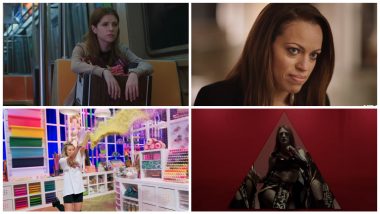 cThe platform has something for everyone and the variety in the content of the trailers proves the notion. From a romantic drama featuring Anna Kendrick to a kids reality show about crafting to a reality show about underground ballroom dancing to a documentary about #MeToo - HBO Max is launching with no holds barred. 'Friends' Fans To Get a Chance To Be a Part Of Their Reunion on HBO Max, Announces Cast!

The news trailers are all very interesting. But apart from the new shows, the streamer will provide Game Of Thrones, DCEU movies, Sex and the City, Euphoria, South Park, Rick and Morty, and other projects in one place. Jameela Jamil Comes Out as Queer After Facing Backlash Over Judging HBO Max's Voguing Show - Read Tweet.

Kendrick not only stars in the rom-com but also serves as the executive producer. She is looking for love in the city of New York. "Why do you need a boyfriend right now?" her friend asks. "This isn't Jane Austen times, I'm sorry!"

The show will also chronicle Kendrick's Derby's journey from first love to her last.

This is a documentary about the #MeToo movement. It tells the real story of music executive Drew Dixon who was the first woman of colour to come forward during the #MeToo movement and accuse music mogul Russell Simmons of sexual harassment. The docu is directed and produced by Kirby Dick and Amy Ziering.

Watch The Trailer Of The Documentary On The Record Here:

The weirdest, cutest and the most interesting offering by HBO Max so far, seems to be this reality show about kids making craft. The kids will compete in a grand crafting studio complete with a craft shop. The kids will run to fill up their ration of crafting materials and produce some out of the box end results. "Glitter makes everything better," says a kiddo. Wholesome.

Watch The Trailer For Craftopia Here:

HBO Max will launch on May 27 in the US. The streamer is yet to disclose information about if the services will be available in India or not. In the coming days, we will see additions like Friends Reunion special, JJ Abram's spin-off series on The Shining, a drama about Julia Child, superhero series like Green Lanter and Justice League Dark, TR Knight's The Flight Attendant, Vacation spin-off and so much more.

(The above story first appeared on LatestLY on Apr 22, 2020 03:37 PM IST. For more news and updates on politics, world, sports, entertainment and lifestyle, log on to our website latestly.com).